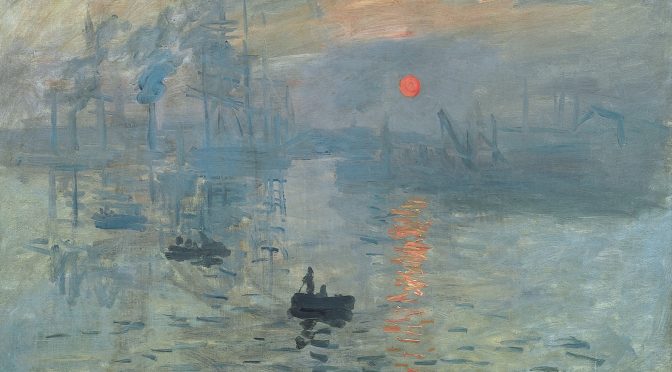 I, CLAUDE MONET, an award-winning documentary based entirely on Claude Monet’s personal letters, reveals Monet the artist, businessman and lover as never before. Disposing of traditional narration and talking heads, I, CLAUDE MONET allows Monet to tell his story in his own words. Based on three thousand surviving letters, the film reveals a tumultuous inner life marked by moments of intense depression and euphoric creation, offering a complex portrait of one of the world’s best loved artists.

The film is accompanied by an original score by award-winning composer Stephen Baysted and is written and directed by Phil Grabsky.  The Guide had the opportunity to send through some questions to the award winning filmmaker before the encore screenings from November 29.

SAG:      Exhibition on Screen has such a wonderful catalogue.  There’s an obvious affinity for the Impressionists but what drew you to target Monet for this project?
PHIL:    Since we came up with the idea of major art films for the cinema we have made over 20 feature films and indeed we have covered a number of the impressionist painters.

Partly that is because they remain among the most popular of all painters – and deservedly so – but also their stories are so wonderful. At the end of the day, cinema is all about story-telling – and these lives are remarkable to look at and understand.

Then of course you have their art which – while my own interests are wide-ranging – I find staggeringly beautiful.  None more so that that of Monet.  There is a reason why others flocked to be near him, live near him, paint alongside him.

Our films encourage you to pause a moment and just look at the actual work – and the more you look at Monet’s work the more bewilderingly good it is.  The trigger for this particular film was not any particular exhibition – indeed our films don’t always flow from a major exhibition – but a desire after making PAINTING THE MODERN GARDEN – MONET TO MATISSE (one of our biggest successes) to look again and afresh at this master.

SAG:    There are over 3000 letters, a life curated in a way.  Is that why you chose the format you have for the film? To showcase the man and his times as a way to better understand the works?
PHIL:    As a director who has made many biographies – more perhaps than any other director in the world!! – I have learnt to start with the correspondence. That is where you start to glimpse the true personality of a person.  It is something filmmakers in the future will lack as we don’t write letters anymore.

For most of us, the great names of art and music are little more than just that, just names. We may have a superficial idea of who they are – based on a film (think Amadeus for Mozart) or a well-known painting (think the painting of the elderly Beethoven scoring the Missa Solemnis) but I can guarantee you that 90% of that impression will be wrong.  For those of you who saw my films on Mozart and Beethoven, for example, you’ll know that the reality is 180 degrees opposite to the popular (mis)conceptions.

So with Monet I absolutely wanted to start – and indeed stay with only – the letters.  No interviews this time and no narration.  Just the letters, the locations and the art.  And however much you think you are a Monet expert I guarantee you’ll see paintings in this film you haven’t seen before and certainly not in ultra HD on a big screen.

And I guarantee you’ll learn something. The reading by the wonderful actor Henry Goodman genuinely moved me when we did the recording session – and this is now a film I am very, very proud of.  I think you really get to understand the passion, the struggles, the humour and the ambition of the man.

SAG:    The paintings hang all over the world, how long did it take to assemble the approvals and shoot the visuals?
PHIL:     We set out always to make a film that folk will want to watch in 20 or 30 years time. We try our best to do something with real gravitas to it – properly researched, well written, excellently crafted.   I could spend my money flying helicopters over poppy fields or bringing in celebrities to comment but for me the mark of a good film is its longevity – and I have to add I always want to feel that if the subject – in this case Monet – were to see it would they think it was fair and accurate and perceptive.  It’s quite a burden sometimes but ultimately worth it.

So we took our usual couple of years to put this film together – at the end we were editing and filming at the same time as a film is only really made in the edit suite and the odd gap would appear that we would have to go out and film. Plus there were certain locations (where Monet actually painted a certain painting) that we needed at a specific time of year.  It was all rather complicated actually – then you have the issue of what you have to leave out!   But it is a reflection, of course of Monet not me, that this is an incredibly beautiful film.

SAG:       It was a life marked by emotional ups and downs and with an original music score from Stephen Baysted, I expect the film is more evocative than just the beauty we expect of the Impressionist Movement.
PHIL:     I think sometimes the impressionists can feel to some a little ‘chocolate box’.  They are hugely popular and on anything from pencil cases to biscuit tins to t-shirts.  The first thing though to understand is that they were all very different – just wait till you see our forthcoming Degas film – and the depth of their work goes far beyond just a pretty landscape or bowl of fruit on a table.

That is why I am trying to encourage you into the cinema to look afresh at someone you may think you know or may think you know enough about.  This is one of the greatest artists of all time and he deserves your attention. His work has many layers, great depth.

Why are these artworks great? Because they reflect humanity – and emotions that are as relevant today as they were 150 years ago.  Monet suffered for his art – even throwing himself in the river Seine in desperation once.  He overcame great personal loss, physical difficulties, financial burdens and much more.  It is a deeply moving personal biography – and indeed Stephen’s masterly score brings that to life brilliantly.  It is no accident that the score now has a life of its on classical radio stations.

SAG:    For the more technical of us, would you mind giving us a potted idea of cameras, lenses and how you protect the works from the lighting?
PHIL:   Just as artists though the ages have benefited from advances in technology – and you have to research and understand what was happening in those spheres to properly understand the life story of an artist – so we filmmakers have benefited hugely in recent years from the rapid advance in camera technology and cinema technology more generally. Actually in all sorts of technological ways – just imagine how useful the smart phone, the satnav, the laptop, etc are to a filmmaker.

My first film was made on a clockwork camera – and the height of technology was a fax.  As for lighting, the issue is no longer the heat of the light as we use ‘cold’ lights – the issue is not knocking them over!  But we have been filming in galleries for twenty years without an accident – that’s what we do.

SAG:      It might be like asking about children but do you have a favourite painting?
PHIL:    It is indeed an impossible question but I would offer up MADAME MONET AND HER SON – an 1875 painting now in the wonderful National Gallery of Art in Washington DC.  It’s a good example of how of course we can enjoy a painting even if we know nothing about it or the people in it – but in making the film I learnt so much not only about the artist but about his subjects.

I now know who that woman is, who the boy is, when it was painted, where, why.  And it is not only a great painting but a moving one.  It speaks not only of the impressionist techniques of capturing the fleeting moments of forever changing light but it speaks of the impermanence of life itself – this was a moment captured of a happy family – that was immediately gone. They did not know what lay ahead – but I do.

I, CLAUDE MONET from Exhibition On Screen [Facebook] screens in Australian Cinemas  (searchable screening map) from November 29.  You can see a trailer for this exquisite film here.