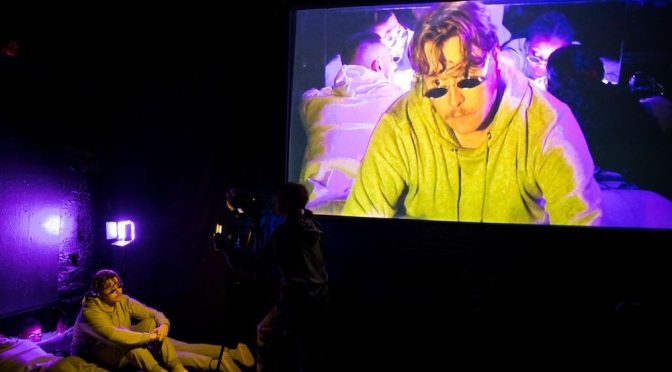 HYPERDREAM offers participants an opportunity to edit a moment in their life, to cleanse a memory that causes pain or regret. The play explores a high tech organisation that provides a service to change how a client feels about a troubling memory but not to change the memory itself.

The skilful actors in this performance play multiple roles, initially as the workers at this organisation offering a service as to how you feel and recall certain memories, and also as the clients of the service. Furthermore, they re-emerge as the actors, director and film crew of a film within the play. It is very impressive the way the four actors, Adriane Daff, Nat Jobe, Angela Mahlatjie and Matt Abell-King, switch roles and display a wide gamut of styles. Nerdy tech workers, damaged and dysfunctional clients, deliberately poor actors and a delusional director are some of the diverse characters well portrayed.

The action is fast paced and uses recorded sound and projected video, pre-recorded and real time, to enhance the technology themed narrative.  They record each other in various roles and scenarios and these recordings are projected simultaneously onto a large screen in the middle of the stage. The nooks and crannies of this limited space is utilised to an impressive extent. Accolades to the confident direction of Adriane Daff and Mikala Westall.

The writers have introduced some complex and intriguing ideas. Raising issues about the unreliability of memory and the opportunity to take advantage of this to possibly change our perceptions of events is worthy of deep consideration. The frenetic pace and rapid shifting of scenarios limits the opportunity for the introspection that could be given to these weighty topics. Perhaps this freneticism is the writers’ commentary on the haphazard nature of memory and the belief our society is becoming one of reduced attention spans.

HYPERDREAM is a very good evening’s entertainment held in the delightful and iconic Old Fitzroy Hotel at 129 Dowling St, Woolloomooloo. It runs until 5th June.

It was written by Adriane Daff, Angela Mahlatjie, Josh Price, Matt Abell-King, Mikala Westall and Nat Jobe. The stage manager was Amellia Bruderlin and sound design and composition was by Julian Starr.