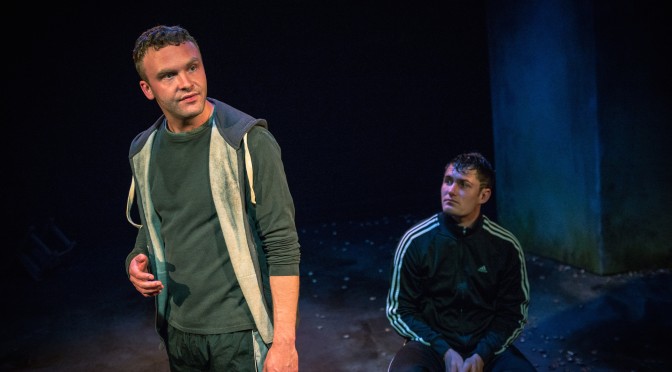 “It’s sad, but funny.” says Howie, partway through his opening monologue. He could well be talking about this play, HOWIE THE ROOKIE.

In prose that has the lyrical lilt of poetry, Mark O’Rowe’s powderkeg of a play is packed with explosive expletives, lush imagery, and linguistic gymnastics, lighting a long fuse that crackles and sparks, setting off a series of perfectly timed detonations, – dramatic, comic and tragic.

Howie tells a story, and then Rookie takes it up. Their stories are symbiotic, double helixed in the DNA of the Dublin they exist in. They share the same surname, Lee, though they are not related.

Howie and his mates are all for getting Rookie, suspected of spreading scabies through their rough sleeping society. Rookie’s on the run from another gang, far more sinister, for killing a criminal kingpin’s Siamese fighting fish.

Both are attracted to a blonde called Bernadette, who plays a noxious nexus in their narrative.

Andrew Henry is colossal as Howie, energetic, eloquent, and nuanced.

Sean Hawkins is equally impressive as The Rookie, vainglorious in his God’s gift to women banter and swagger.

A stark stage in grungy granite with a glittering mound of bottle top crowns, two seats and an upturned child chair sets the scene for these two electric performances, main circuit cabled into the power box of the playwright’s verbal pugilism.

No praise could be too sheer for this production directed by Toby Schmitz, every element justifies applause.

Perfectly pitched to the pub’s performance space – even Rookie sips a schooner during Howie’s storytelling – HOWIE THE ROOKIE plays The Old Fitzroy Hotel, corner Dowling and Cathedral Streets, Woolloomooloo 8pm Tuesdays to Saturdays and Sundays at 5 until October 25.