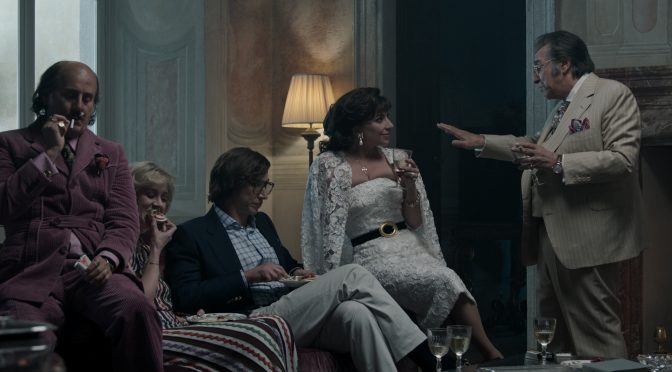 Like a Marvel version of The Godfather, HOUSE OF GUCCI is flash trash veneer and little volume.

The rich and affluent are the rich effluent in this baggage ridden tale of envy, pride, lust, mistrust and murder amid the Milano fashionista.

The story begins in the late 1970s, at a critical juncture in the fashion empire’s history. The glad bag Gucci family’s global reach has broadened, but these leather good Medici wannabes are saddled with financial improprieties, stifled innovation and a cheapening of the brand. The two senior stake holders are the colourful and wily Aldo, and his more conservative and detached sibling Rodolfo. Both brothers have unsatisfactory relationships with their sons, especially when Rodolfo’s boy, Maurizio plans to marry Patrizia, who he deems a dolly bird gold digger.

The Machiavellian Uncle Aldo finds a kinship in the cunning Patrizia and, together, they persuade Maurizio to set aside his legalistic ambitions and join the company, thus becoming the presumptive heir – much to the displeasure of the hapless Paolo, whose design dreams outweigh his tepid talent.

Lucretia-like, Patrizia goads Maurizio into staging a coup. After inheriting his father’s position in the company, the couple slowly and stealthily seize control of the business. They connive Paolo into selling his shares by dangling false promises. Shortly after Aldo is released from prison for tax evasion, they buy him out as well.

Through her machinations, Patrizia has made a monster of Maurizio, the once hesitant timid now hedonistic tyrant begins to revel in his power and privilege. Having betrayed his family, he now turns on Patrizia and initiates an affair with a childhood friend Paola Franchie, subsequently serving divorce papers on Patrizia.

Hell hath no fury like a woman whose ambitions are thwarted and whose marriage vows violated, so Patrizia resorts to witchcraft and forges a dangerous alliance with a crafty psychic, Pina Auriemma, a fortune teller who communes with assassins rather than spirits.

Lady Gaga is gaudy and giddy as Patrizia, an ambitious ambusher hoisted by her own pernicious petard. Adam Driver journeys from geeky and gormless to greedy and rigor mortis as Maurizio.

Big broad acting strokes from Al Pacino and Jared Leto and Salma Hayek as the sinister soothsayer, Pina, pay off, while Jeremy Irons controlled characterisation of Rodolfo is a contrast in cool.

For all its flash and bluster, HOUSE OF GUCCI feels flat for a great deal of its inflated 158 minute run time, and the choice for all the actors to put on faux Italian accents works against the film. It’s like a knock off bona fide Italian classic.

The trailer positioned the picture a little like a Bond movie but there is little real excitement in the film, little suspense and only a couple of stunning locations.

Flash, brash trash, HOUSE OF GUCCI rarely glisters, glistens or gleams, and is, unfortunately, not gold.