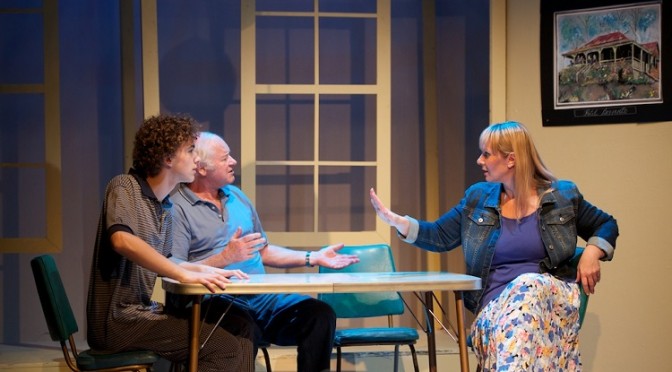 ‘Melancholy’ is the title of Meg’s autobiographical novel that has brought her fame and a tilt at the Booker Prize, and which sets the sparks flying within her family in leading Australian playwright Hannie Rayson’s 1990 play, HOTEL SORRENTO. It is also a good word to describe the tone of Rayson’s play which has a Chekhovian feel to it, that deep sense of time passing, and the inevitability of the winds of change sweeping away everything in its path.

HOTEL SORRENTO charts an emotional reunion between two sisters, Meg (Melanie Robertson) and Pippa (Gemma Munro) who have been living overseas, Meg in London, Pippa in New York, and their elder sister, Hilary (Sarah Purdue) who has been the carer of their frail father, Wal (Barry Moray) and is also the mother of a sweet ten year old boy, Troy (Oliver Beard). The reunion is held at the family home in the pretty, sleepy Victorian seaside town of Sorrento situated on the Mornington Peninsula.

Raison’s play explores a lot of territory. Two of the sisters have lived adventurous lives, living overseas for many years. Now back at home they are left to reflect on what all this experience means…what it means to be Australian,…and where they now feel best placed to realise fulfilling lives.

In the director’s program notes, Shane Bates wrote about how delighted she was to be finally given the opportunity to direct Rayson’s play which she fell in love with when she saw it performed in the early nineties.

She grasps the mettle coming up with a warm, inviting, intimate production.

The world of the play was vividly brought to life. I particularly enjoyed the casts’ frequent use of the apron (front) of the stage as if they were at the seaside, complemented by a lulling soundscape of waves coming in.

Visiting the bar area at interval, a mock-up copy of Meg’s book perched on a little book stand- a lovely touch.