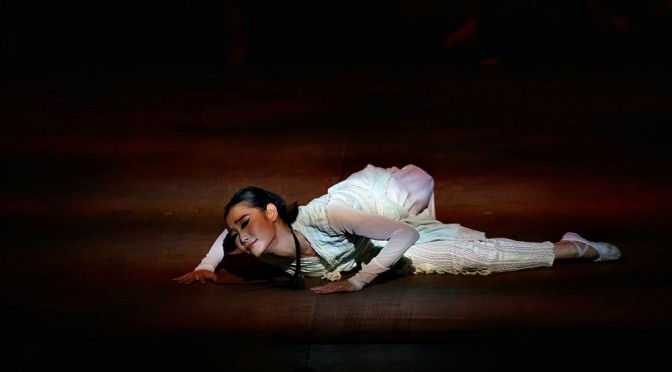 The recorded music was very effective– at times ominous drumbeats, at other times sweeter, and more lyrical passages, and there were Peking Opera influences too. The score was at times stirring, martial and military in style as well.

There was impressive attention paid to the stunning, detailed flexible costumes, a couple of which were on display in the foyer. Yeung Tsz –Yan’s lighting was masterly at times starkly dramatic, at other times lyrical. Sunrise was contrasted with dark shadows and the use of silhouette, or striking, Cazneaux- like diagonal lighting meant  one assumes to represent bamboo blinds.

The multi-level flexible set highlighting a mountainscape was beautiful.

Mulan has an extraordinary baton twirling like martial arts solo using her staff at one point. Some of the choreography was tight and very stylized. In some of the pas de deux there were death-defying jumps and leaps, similar in style to the work of Murphy or MacMillan. Dynamic use is made, at times, of rippling, flowing,  heavily embroidered military banners.

The leading ballerina Pan Lingjuan as Mulan is astonishing. At times , especially in the early sections of the work , she was for me reminiscent of a young Janet Vernon with her powerful presence, and electric, singing ‘line’ and fluid lines. Her solos were ravishing. A  mesmerising, dazzling performance.

The ensemble work was splendid. For the women, especially in the second half, there was plenty of beautiful unison work – the lantern dance entrance towards the end was exquisite .The ‘loom dance’ beforehand , with Mulan thinking of her friends back at home working on the loom, includes plenty of tight and repetitive ‘weaving’ choreography and the corps of women- all dressed in white -is a kind of the equivalent of  depicting swans in classical Western ballet, though from an Eastern perspective.

The strong, athletic male corps struts their stuff with plenty of tightly choreographed martial arts like sections and some parts are similar in style to the boy’s dance work in Murphy’s  “After Venice’’.

The General was strongly danced by Chen Juun in a commanding manner. When he finds out that Mulan is actually a woman, after posing tableaux like like a moon goddess, he is thunderstruck.

Mulan’s stern but loving and supportive father was wonderfully performed by Huang Lei. There is a delightful dreamy section in Act1 with Mulan as a young girl being taught by her father and the reunion in Act 2 with Mulan returning as an almost unrecognizable warrior woman was very moving.

The Hong Kong Dance Company’s presentation of  THE LEGEND OF MULAN was performed at the Concourse, Chatswood between the 17th and 19th September.