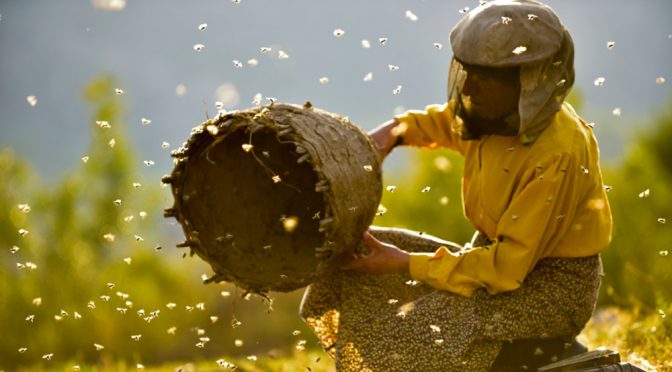 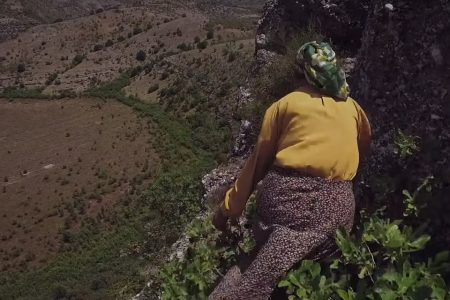 Best make a bee line to HONEYLAND and enjoy a bittersweet vicarious journey with an ancient apiarist, the embodiment of bio-diverse guardianship.

HONEY LAND begins with an astonishingly arresting vista of a mountain eyrie in the Balkans being ascended by middle aged woman, Hatidze Muratova. She’s not there to bird watch or gather eagle eggs but to harvest honey from a naturally settled hive.

Hatidze lives with her ailing mother twenty kilometres from Skopje. She’s the last in a long line of Macedonian wild beekeepers, eking out a living farming honey in small batches to be sold in the city – a mere four hours’ walk away.

Into Hatidze’s hermitage comes an itinerant family of cow-herders whom she welcomes. The land of honey might now become the land of milk and honey.
Instead of harmony, however, the arrival brings upheaval, the itinerants prove to be incompetents, the cattle are a catastrophe.

His milkers decimated, Hussein, the itinerant family’s patriarch, senses opportunity and develops an interest in beekeeping. Casting Hatidze’s advice aside in his hunt for profit causes a breach in the natural order that exposes the fundamental tension between nature and humanity, harmony and discord, exploitation and sustainability.

The itinerants turn into invaders, with no sense of country, pillagers and polluters of an ancient ecology that depends on delicate balance now put in diabolical danger from rapacious human greed.

The debut feature from documentarians Ljubo Stefanov and Tamara Kotevska, HONEYLAND was shot over three years by a skeleton crew committed to an intimate collaboration between filmmakers
and subject, this intimate study has the widescreen sweep of an epic, visually ambitious and driven by an unexpectedly dramatic narrative and a surprising sense of humor.

HONEYLAND is a tough and tender glimpse at a despairingly disappearing way of life, and an unforgettable testament to one extraordinary woman’s resilience.

It may be set in Macedonia but there is real resonance for Australian audiences concerned about traditional sustainable ecological management in the face of recent bushfire devastation.