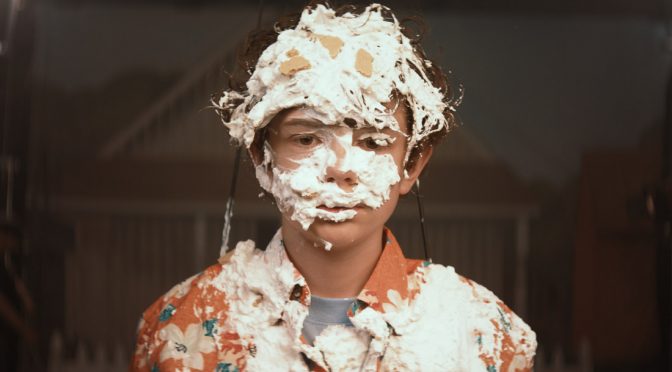 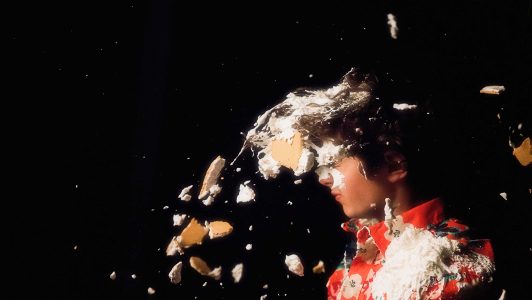 One can only hope that child star, Noah Jupes, playing child star Otis, the eponymous protagonist of HONEY BOY, does not suffer the same post traumatic stress disorder his character does.

Based on Shia LaBeouf’s life and relationship with his manager father, HONEY BOY is a lacerating love letter, a forgiveness of a deep faulted father, an examination of that fissure that can form, fracturing filial affection, the fine line between mentor and tormentor, a hairline fracture that stress fatigues the whole father son relationship.

From its unforgettable opening scene of a harnessed man standing amidst the carnage of a plane crash to its retina searing final image, HONEY BOY transcends what could so easily have been a hackneyed show biz story into a brave, sad, surprising and triumphant film.

Otis is a protean pre-teen actor residing in Los Angeles making a living appearing in television shows and commercials. He resides with his father, James, an ex clown and now Otis’ manager in a ramshackle motel room in the San Fernando Valley.

The motel is home to a motley crew of tramps, traffickers, and transients, among them, Shy Girl, a teenage prostitute who forms a tender attachment with Otis that transcends the motel squalor and their individual domestic traumas.

Noah Jupes, terrific in last year’s Ford vs Ferrari and The Quiet Place, he excels as the young Otis, collaterally damaged by his parents divorce, his precocious talent a conduit for his father’s false bottomed dreams and aspirations.

Shambling, bespectacled and sporting long sideburns and a mullet, LaBeouf transforms himself into a facsimile of his father, a man who can easily be overlooked, and often is.
He emphatically embodies the film’s themes of masculinity, the mythological figures in our lives, the effects of addiction on second generations and the thin line between being ourselves and performing ourselves, a projection of ourselves, for others.

Individually impressive as these actors are, HONEY BOY works because of the chemistry between the two, the same easy chemistry LaBeouf has with his young co star in The Peanut Butter Falcon.

HONEY BOY quite brilliantly portrays how forced early maturation of a child can trigger a regression later in life, a reclamation of lost childhood that manifests itself in juvenile delinquency at age 22.

In essence, HONEY BOY is a picture of the Peter Pan principle and its ramifications. James’ rooted aversion to growing up has an adverse effect on his son, the boy becomes the parent to the father, the father is frustrated to the point of abuse and guilty of wantonly abrogating his responsibility and authority, the child left wanting parental love and guidance.