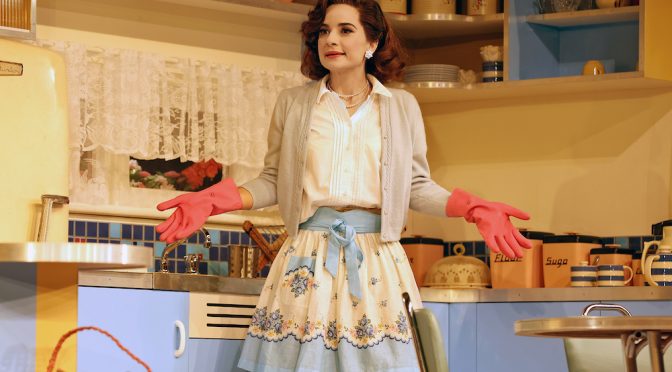 Sometimes, in life, one can just feel stuck, and that brings out the need to change direction, in effect to make a sea change.

Judy has been stuck in an unsatisfying job in corporate finance for years. Her company offers her a redundancy package. She accepts the offer gleefully.

She tells her husband, Johnny, that she doesn’t want to look for another job. She wants to make a very different kind of sea change.  Judy wants to revert back to an earlier, gentler period in time. The time, the 1950’s.

What she proposes to Johnny is that they do the full 1950’s thing. She will become the perfect housewife and her husband will be able to come home to a clean house, a home cooked meal and a warm, loving bed…

What’s more Judy will refashion the house into a nineteen fifties house. She also wants them to dress in fifties garb and also to only listen, and dance to, fifties music. Like I said, the whole fifties thing..a total makeover.

Johnny signs on the dotted line. So begins the next chapter, more like opus, in their lives.

The play kicks off well into the couple’s new life with cracks soon appearing in the facade.

Andrea Demetriades gives a compelling performance in the lead. Her acting is marked by its vitality and focus. The play is, above all, Judy’s journey. She drives the narrative. We keenly watch as her journey unfolds and try and second guess where she will ‘land’ at her journey’s end.

Anthony Taufa  gives a fine performance as her mild mannered husband Johnny who starts to get prickly as their ‘situation’ begins to unravel.

It is observed, and this is just an observation, that physically, Demetriades and Taufa are an odd match;  Demetriades’s slight, demure frame against Taufa large, tall build.

Very steadily the playwright introduces us to the other characters in their orbit. Veteran thespian Tracy Mann gives her trademark reliable performance as Judy’s exasperated mother, Sylvia.

Gareth Davies and Gabrielle Jamieson play their best friends, another couple, Marcus and Fran. They play along with their game but make it pretty  clear early on that they are not so into it, when they announce that they will not be joining them in an upcoming retro event.

Kirsty Marillier plays Johnny’s new boss, Alex. Judy gets it out of Johnny that he fancies her.  Predictably Judy, through Johnny summons Alex over to their home to make her own appraisal of the situation.

A note to end on. The premise is intriguing, allowing for many theatrical possibilities which are well realised in Jessica Arthur’s production. My feeling is yes, the play does fulfil its promise. It comes up with a finished portrait of the captivating Judy.

HOME, I’M DARLING is playing until Saturday 15th May 2021 at the Drama Theatre, Sydney Opera House.