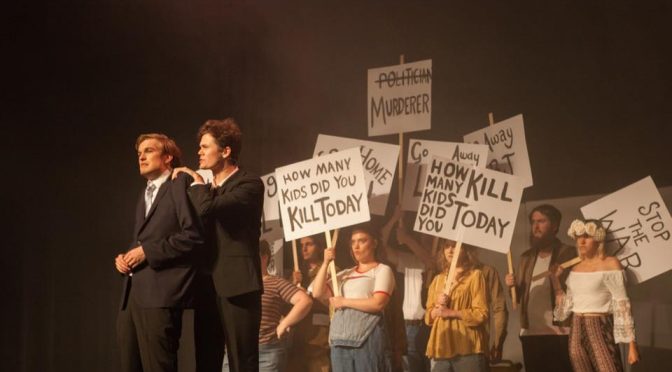 Go see HOLT, THE MUSICAL because it’s a rippingly good time. Great songs, not too many, well penned music that gets along swimmingly with the dialogue.  Shark sharp performances, not one of the principal cast is treading water, and an ensemble, crew and musicians who create that warm bubble around them.  And no water joke unfloated.

We meet the young Harold, actually he was called Young Harold until he died in 1967, being warned against swimming in the sea by his mother. At the end of Act 1 Harold will be taken by the sea while swimming at Cheviot Beach spawning the greatest maritime mystery in Australian history.   At the time he was a serving Prime Minister, a serial adulterer, introducer of Decimal currency and married to Zara.

That’s what I remember most because outside broadcast was a new thing and the television cameras waited eagerly at the search site for the arrival of Holt’s socialite wife.  She was actually a shrewd and successful businesswoman in her own right but no matter.  My mother hung on every televised moment of the waiting because she wanted to see what Mrs Holt was wearing.  Sigh… was it a simpler time?

HOLT THE MUSICAL takes those kind of vague old people memories and the curiosity of a new generation to make a show which is marvellous fun.  There’s enough factual info to be interesting, there’s enough fantasy to poke fun at the Establishment and there’s an immediacy.  What the old white men of the Australian Parliament did then still resonates and impacts on us today,  whether we like it or not.

But this is not an angry offering, it even begins with a cracker of a joke and a sweet, almost melancholy song.  Christie New as Olive Holt dives in at high tide, her lovely voice and very clever negotiation of lyrics not always matched to rhythm sets a high bar for the rest of the show.  The joke in question is from Hugh Guest who is our narrator and the post-it note reviver / reviser of half forgotten remembrances of the time.  He is warm and funny yet can be portentous and comically narrative when required and he lights up the stage each time he appears.

A stage that belongs to Holt.  Fred Pryce is really terrific.  He has such a huge role and his singing and his charisma are just delightful to enjoy.  From the witty way he sells a history of economic theory at the beginning to the pensive  ballad that presages his death, he is in command of the singing, the dialogue and of bringing a character who the audience sails along with.  Technically good also, that fast patter of the Rum Hoedown appears effortlessly skilled.  He is the wide-eyed optimist that we come to know and will miss when he goes under.

He will be missed by many including as his wife Zara (Jacinta Gregory).   Gregory is also the Lyricist with Jos Markerink and co-director with Alexander Richmond  (gifted pairings those!) and at the performance I attended Zara appeared somewhat weary, just a tetch too downbeat and stoic,  but in great voice.  Her soft shoe shuffle intro song with Pryce is romantic and relationship setting.  Her solo towards the end of Act 1 is wistful and powerful and an indicator of the zest that is sure to re-surface during the run.  Zara is the smarter, more policy astute and much more driven of the marriage in this iteration.  And more faithful.

Holt’s love interest is actually Marjorie, played by Ondine Manfrin with a stereotypical sexy kittenness, the perception of which is neatly challenged later in the show.  And hers is just one  of the many  engaging performances on display. Holt’s ‘sister’ Clarence (Beth McMullen) is a hoot and look out for a Robert Menzies played by Clare McCallum with an imperiousness and heartiness that steals all her scenes.  McCallum can throw a line like a pro, is a huge hit with the audience and handles the physicality like a slo mo bullet stop.

Patrick Morrow is also great fun as John McEwan and he leaves none of his character’s odious bigotries unsmirked … without going ott.  Deliciously ott though is Tom Waddell’s LBJ.  His slow jazz seduction of poor Harold is exactly what it felt like at the time.  Plus, there is a dick joke par excellence in there too!  As Whitlam, Theo Murray goughs it up hardcore and his stentorious massaging of the population is hilarious. And the pisstake of he and McEwan in a tropey dance sequence is truly clever.

That sequence is also superbly physically satirical.  It never ceases to amaze me what good choreographers can get out of non-dancers.  If the truly beautiful descant in Latin early in the show is anything to go by, the ensemble are primarily there for their voices. But Felica Addison has put together some thoroughly entertaining moves.  The choreo for the Dollar sequence enhances the fun of the song without pulling focus.  Perfect.  That energetic, enthusiastic and committed ensemble can even Frug.

The band is stellar  and I loved the fact that they played so badly during the Wesley College speech … that just cracked me up.  I could, however, have cheerfully stuffed the drummer into his or her own kick drum.  For Holt’s sake pad that thing, horribly intrusive.  But conductor Laura Heuston keeps tight control over the rest of her group and there are some lovely orchestrations which are so  well played.

The cello is heartbreaking in “Cheviot Beach” and the woodwind and brass give body to the music without overwhelming.  It’s really well written music played with detail and precision.   And a yahoo to the audio operator who mixed it superbly.  Not too loud, voices sitting on top of the orchestra and a bass to soprano mix that suited the voices so well, especially in the duets.  Big kudos to you!

The songs are in a variety of styles, they don’t overpower just fit seamlessly into the entertainingly written text (Book by Alexander Richmond).  The dialogue allows for character development and despite an unavoidable episodic feel in Act 1, it tells the story without getting bogged down in fact-imparting.  And there are some washover surprises too.  The “Circle of Capitalism” sequence is classic … enough double speak to make an orwell blush.

And like sending the audience out at interval with a sadness and a sense of loss.  This does bring me to Act 2, which has issues.  There are things to be said and I expect the creators will get some honest feedback about whether it is even needed.  But for heavens sake don’t get rid of “You Fucked It Up Harry” … my favourite song.

Having told you exactly what I love about HOLT, THE MUSICAL I also need to add that there are some rough spots.   Currently its got a bit of a revue feel in costume, props and set etc, and the lighting is problematic but musicals, where an audience should be able to see the performer’s mouths, is notoriously difficult.  But in its heart this is a big stage, big idea show in every aspect that really counts.

Excellent writing and orchestration is allied with tremendous singing and dancing and thoroughly enjoyable characters.  Like young Harry it is destined for great things and the cast know it, with a wink wink to the audience when shit goes sideways.  That’s part of the fun: plastic sabres and bad South African accents go along with hilarious desk misplacement.

Go along … see it if you can get a ticket, you won’t regret it.

But don’t do what I did.  Spend hours freestyling around the internet to remind myself of the facts.  The wonderful song about the conspiracy theories after Holt disappeared sounds ridiculous to our ears now but they are all genuine and this jaunty trip through the distruths of history really does pique the memory.  But don’t go into that whirlpool where Clarence is Clifford and Marjorie really was there.  I wonder what she was wearing.  Might look up the footage again.

HOLT THE MUSICAL is playing at the Seymour Centre and I have a feeling it might be sold out, which it fully deserves.  So keep an eye out because I will be very disappointed if it doesn’t , ahem, resurface!