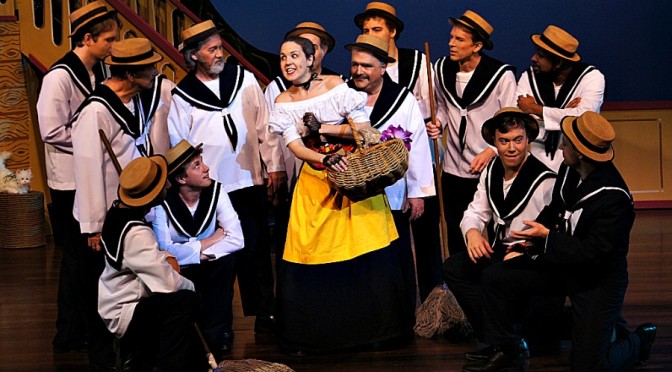 If you like a straight, quite traditional version of G & S then this is for you. This year the production by the renowned Savoy Arts (now performing as Gilbert and Sullivan Opera Sydney) is HMS PINAFORE, first performed in 1878 and regarded. as one of their ‘big three‘ ( along with  The Mikado and  Pirates of Penzance). Directed by Elizabeth Lowrencev and under the graceful , inspired musical direction of maestro Rod Mounjed this is a production that vocally and musically delights and enchants .

Ignore the ridiculous plot twist at the end that theoretically puts all to rights. Just sit back, relax and enjoy.

The set design of the ship is terrific , light and elegant and there is more space here for the orchestra than there is at their old venue at the Zenith.

Firmly set in rigid Victorian times , with lavish costumes of the period.  Lack of wealth and class being the major impediments, can true love prevail ?

As dashing Captain Corcoran, Brendan Iddles is superb , terribly handsome in his sensational uniform  and is in fine voice.He is a good, polite man loved by his crew. No wonder Buttercup is secretly in love with him! His ‘Fair Moon I Sing to Thee‘ reveals his lonely, sadder and softer side.

Sir Joseph Porter QC KCB, ruler of the Queen’s navy , was brilliantly played by Dean Sinclair.Wickedly delightful Sinclair plays him as a mincing popinjay , a sneering supercilious dandy peering at people through his lorgnette , very full of himself , with  perfect comic timing. He dazzles and is resplendent in full court regalia , white kneebreeches and stockings and glittering bejewelled jacket . Brilliant . His ‘When I was a lad’ sets the tone and there is a wonderful hilarious unexpected  sight gag during ‘ Never Mind The Whys and Wherefores’  .

Our hero Ralph Rackstraw was tremendously played by Michael Handy. Tall blonde and very handsome, he has a great tenor voice and is very popular with his fellow crew (except Dick Deadeye)

His unobtainable love (or is she ?) Josephine , our leading lady, was delightfully played by Sarah Arnold who sings marvellously. In Act 1 she is a Spring vision in pink and green sprigged muslin. She is torn between being a dutiful daughter and her love for Rackstraw  –  her ‘ The Hours Creep on Apace‘ in Act 2 was heartfelt.

Gyspy bumboat woman Buttercup was wonderfully played by Anne-Louise Finlayson in a yellow apron, black skirt and red corsetry. She is dark and mysterious and has the means to set everything right, but will she?!  Her rollicking introductory song was splendidly done as were here duets with Corcoran (‘ Things are seldom what they seem’).

Mention must also be made of the terrific performances of the Botswain ( Anthony Mason ) and the unpopular villain ,sneak and informer Dick Deadeye ( Gordon Costello ).

Some of the ensemble choreography felt a little squashed and stilted, a bit artificial, but Act 2’s ‘Never Mind The Whys and Wherefores’ makes up for all that, with a  hilarious Morecombe and Wise style finale to the number.

Oversize cousin Hebe, like a galleon in full sail , out to fuss over and capture Sir Joseph, was delightfully played by Ella Arundel.

Auriophiles will admire the cute white and fluffy ship’s cat and notice the play on words when the ‘cat’ refers to the cat of nine tails .

A most impressive and delightful production full of British patriotism and rollicking enjoyment that upholds the stirring tradition of the British (and Australian ) navy .

Three cheers for Her Majesty!

There are three more opportunities to catch this ship before it sails out of town. HMS PINAFORE is playing the Smith Auditorium Lyric theatre, Shore School, William Street, North Sydney next Friday 3rd October at 8pm and then Saturday 4th October at 2pm and 8pm. Bookings- www.gsosydney.com.au