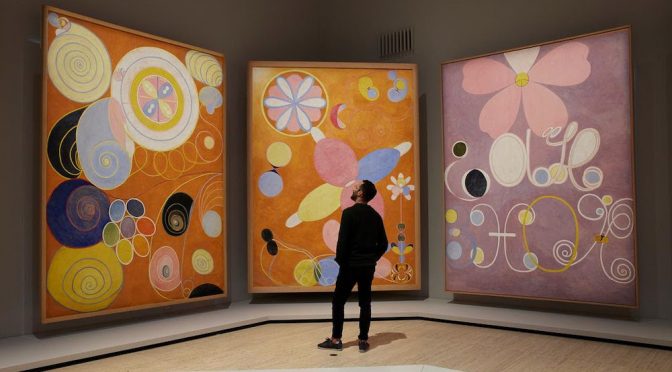 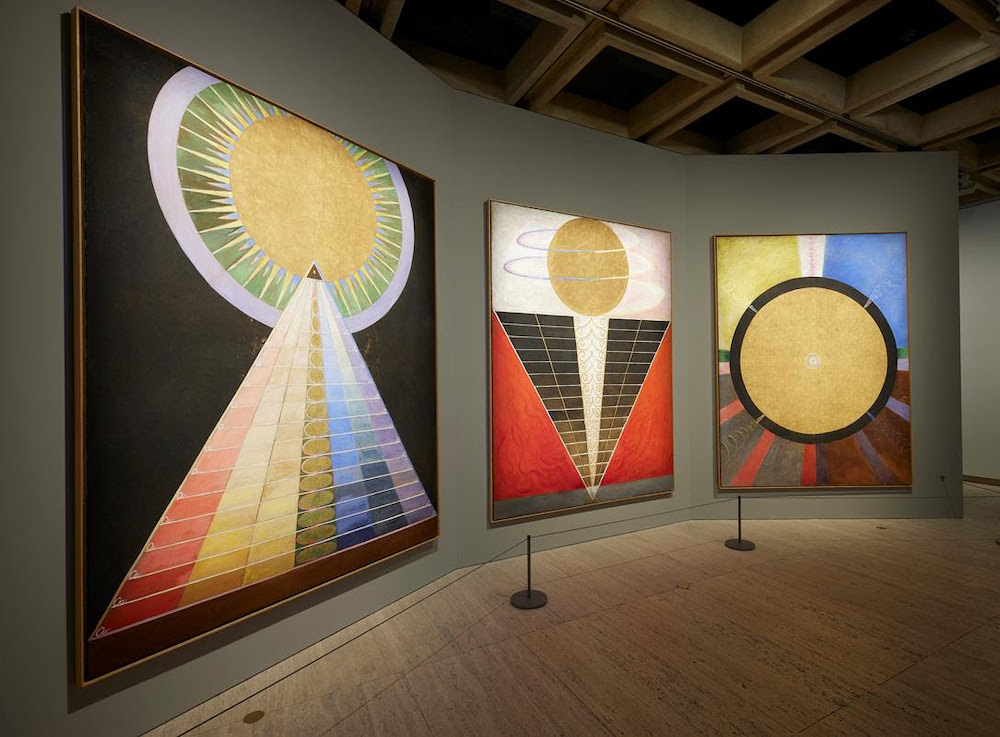 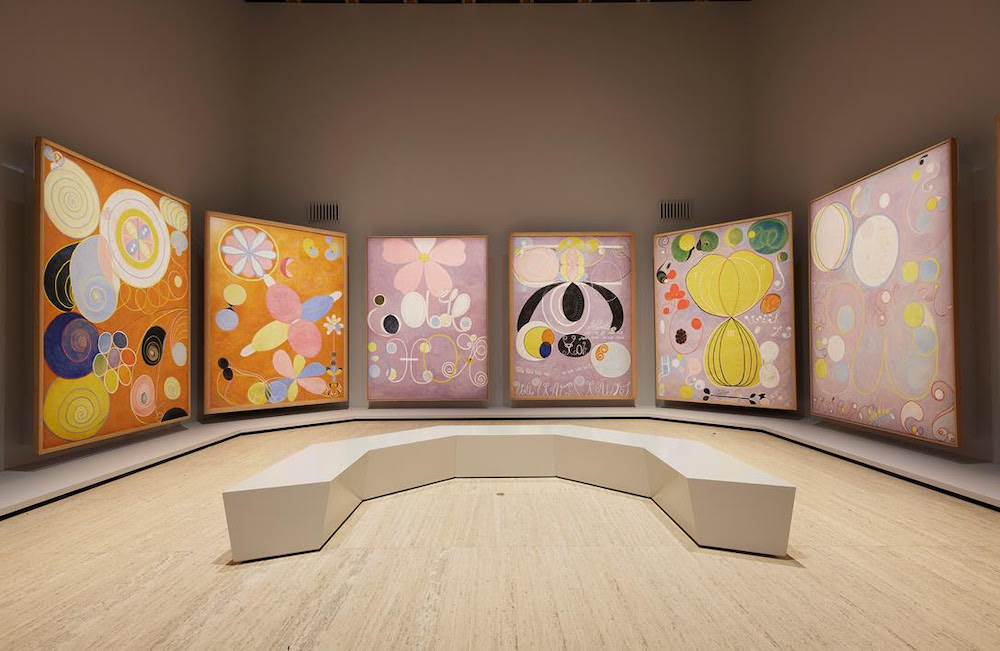 Joyful, feminine, enigmatic, visionary. Hilma af Klints monumental works are a delight to stand before and allow oneself  to become absorbed by the brilliance of their colours, sinuous lines and symbols. Modern, contemporary, abstract, but over one hundred years old, they are astounding. And not only for their beauty and age but because they were created independently of any other palette-wielding-boys-club – by a woman – at the birth of the 20th Century. Then, there were other artists who claimed to paint reality beyond the perception of sight and the four senses – symbolists, early expressionists and prophets, but their works couldn’t relinquish figurative representation like Hilma af Klint’s abstracts do.

Hilma Af Klint (1862-1944) invested her time, analytical reasoning and artistic immersion in searching and exercising colour theory and expressing ideas inherent in spiritual movements prevalent during her day. She drew upon Theosophy, Christianity, alchemy and Rosicrucian ideas and imagery. Consciously or not, she lifted visual motifs from medieval, renaissance and enlightenment manifestos, tweaking them and making them her own. Angels, swans crosses, light spectrums, circles and geometric forms, spirals and coils abound. Each recognisable element is used symbolically.

After joining  the Theosophists she became one of a group of women called The Five who came together to discuss their spiritual concerns, participate in séances and document images spoken to them by otherworldly guides on paper. You’ll encounter a selection of works by the Five early in your walk through the exhibition. In the pencil sketches the energy that the artist was expending can be sensed with the mark making. There is something feverish about them. You can imagine dots being hammered, and the pencil being pulled along almost parallel to the surface and see the changes in the lead as the drawing was created.

Af Klint’s major works, a series of ten tempura on paper paintings mounted on canvas, The Ten Largest (1907), chronicle four stages of human development from birth to old age. You need to be told that this is what she is representing because the images they depict were channelled through her by otherworldly guides during séances – like automatic writing – and then incorporated into her major works. In fact, for years after she painted them she was on a spiritual quest to understand what they mean. To look for reason in them is a fool’s quest – for when you think you understand a motif something else on the surface distracts you and your eye tumbles from one earthly delight to another. While the paintings may not represent concrete reality they employ organic shapes that can be recognised – floral, spiral and shell-like, circular and reminiscent of sacred geometry, and employ sinuous line-work that may or may not be forming coherent words. The choice of colours of shapes, lines and backgrounds are all deliberate, planned and gorgeous. There is nothing dark about The Ten Largest (1907). In fact, in contrast to abstract artists who came after her, her major works are quirky and uplifting – her spiritual plane is vibrant and happy.

The Ten Largest form the core of her most important works, however there is much more. Intelligent as well as spiritual, she was aware of the progresses in science of her day and incorporates diagrammatical elements of wave energy and x-rays as well as botanical elements, even sperm cells in her blue, green and yellow series, Primordial Chaos. Her use of colour is symbolic – blue she ascribes to women and yellow to men, while green, like the paint that creates it, is a mix of the sexes, making a homogenous sex.

There are displays showcasing her notebooks and a room dedicated to the bright and illusionary watercolours of her later years. Here figures emerge out of the watery colour pools and can disappear as you begin to look for them in sweeps and splotches of paint. Finally there are two watercolour self-portraits that are figurative where she almost becomes a metaphysical element herself.

Hilma af Klint believed the work she was doing had a higher purpose for posterity. She stipulated that they were not shown for at least two decades after her death. Perhaps it was her humility that contributed to her obscurity? It couldn’t have helped her in an art world documented by men. She must have been aware that she was the first in her field, a visionary. Did she fear her work would be misunderstood? Yet she had the conviction to understand how important her art would become. Unfortunately, where she should have been lauded as the mother of abstraction she was largely forgotten.

There is so much to absorb and be delighted by in this exhibition. That the rediscovery of her work re-writes the history of modern art is incidental to the delight in its viewing. Go and enjoy the works. That’s what any artist wants.