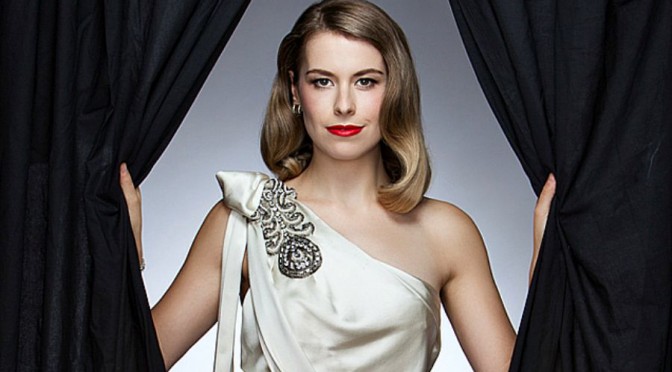 The play, of course, is based on the 1956 movie, HIGH SOCIETY, itself based on a play called The Philadelphia Story, which was a starring vehicle for Katherine Hepburn.

It’s T for timing in a triple threat performance, that incorporates vocal and violin virtuosity.

Bert LaBonte’s boat builder Dexter still harbours deep feelings for his ex and becomes a sly catalyst in scuppering the impending nuptials by providing safe passage of a reporter, Mike, and photographer, Liz, to the wedding.

La Bonte, like Lehpamer, hails from Geelong, where there’s obviously something in the water, their footlighters faring better than their footy team.

Cole Porter’s songs are gorgeously arranged by musical director, Daryl Wallis, bringing fresh energy to such standards as Well, Did Ya Evah?, Who Wants to be A Millionaire and the Academy Award nominated, True Love.

Everyone in this excellent ensemble memorably serves the songs and the farcical antics of the story.

Michelle Barr and Phillip Lowe as the domestics, Mavis and Chester are delightful – forget the staff stealing the silver, these servants come close to stealing the show!

Laurence Coy as Uncle Willy, dips into his inner dipsomania and delivers a delicious comic turn. The lecherous inebriate may be of high society but certainly not high sobriety, a libertine leering and lusting after the luscious Liz.

Liz, pining for her colleague, Mike, to whom she is invisible, in a romantic sense, is majestically  played with love lorn resignation tempered by a steely resilience by Virginia Gay.

And Bobby Fox is fantastic as Mike, the inverted snob, who succumbs to the spell cast by Tracy.

The intimacy of the Hayes Theatre is a challenge for sound mixing – the actors miked with a voluminous band – a small imperfection in an otherwise highly entertaining show.