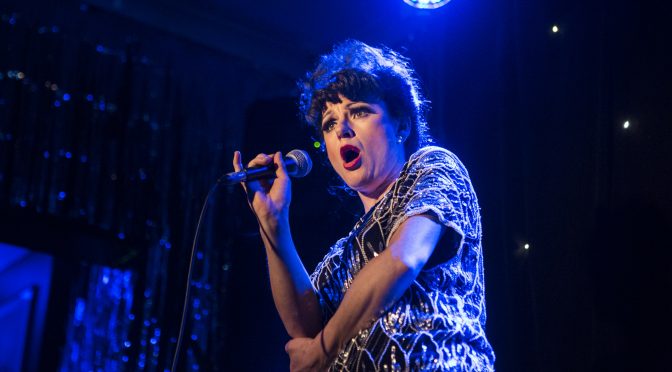 The Coke neon sign has dimmed but this show sparkles with wit, freshness and quirkiness. It is part of the expansion of the City of Sydney’s Art And About program which is a celebration of Art in unusual places. You could not get a more unusual place than a theatrical performance in a former brothel, the Nevada in Kings Cross, which boosted the biggest bed in the world. This cabaret is a history of the Cross told through its most colourful characters. It takes place over several floors and in different settings to immerse you into the most notorious era of the fifties to the seventies in Kings Cross.

The show is full of surprises and carry out with gusto and elan. I am in two minds how much to reveal. It is performed by a multi-talented and experienced ensemble of sixteen actors, artists and musicians who bring to life Bea Miles, who was jailed one hundred and ninety five times for ‘jumping the rattlers’, Abe Saffron’s henchman, Julie Bates’, an infamous madam, Rosalie Norton, the sex and occult witch, a drag queen, a prostitute, and singers at the Silver Spade in the Chevron Hotel. I was a teenager when these people inhabited the Cross, so the show was even more vivid and provocative for me.

Like the Cross, it seems rough and ready, but beneath that veneer of ‘dirt’ is a highly polished and imaginative mix of spoken word and song. Written by Trevor Ashley, Benito de Fonzo, Nikki Britton, Ray Badran, and Ben Fink, and joyfully directed by Lucan Jervies. I loved this experience. The lighting design by Matt Marshall immersed you in the decadent world of a brothel, the sound designer Jed Silver recreated the ambience of The Silver Spade, and set designer Hugh O’Connor took you from Bea Miles tiny garden and some of the intimate spaces literally made you rub shoulders with the actors who should be included in the writing credits due to their clever ad libbing.

I hope that I have not revealed too much of this ably guided seventy minute tour of the Nevada but the brio and inventiveness of this happening seems to fly by like the wild ride of mid twentieth century Kings Cross.