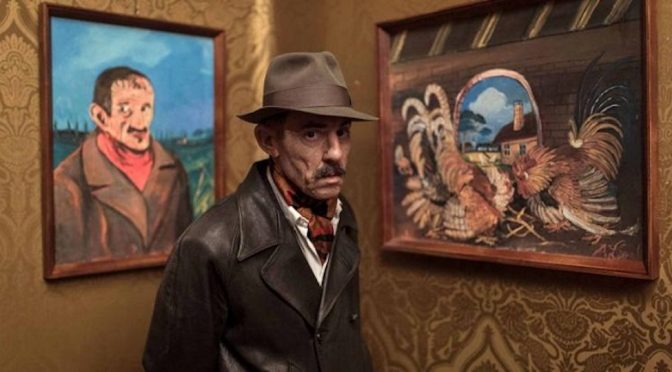 Screening as part of the Italian Film Festival, directed by Giorgio Diritti, this is a magnificently acted, beautifully photographed,(Matteo Cocco) , powerful, extremely moving film that tells the story of troubled , rather anti-social Antonio Ligabue (1899-1965) – originally Laccabue – an Italian painter and sculptor who is now regarded as one of the most important Naïve artists of the 20th century. He was a self-taught, defiant outsider.

First we see snippets of his early life – the film begins in the asylum with flashbacks showing glimpses of his childhood and his Italian – Swiss background. Little Antonio is entrusted to adoptive parents and immediately begins to have psychophysical disorders, ill with rickets, and after being expelled from school and attacking his foster mother, he is hospitalized several times in a psychiatric clinic. At school he was bullied by classmates and regarded with derision by virtually all adults except his foster mother Elise (Dagny Gioulami).

The son of an emigrant Italian mother, Ligabue ( magnificently played by Elio Germano) is deported from Switzerland after his mother’s death. His mother, Elisabetta, and three brothers died in 1913 as a result of food poisoning (by his father?). Mothers are an important theme in this film .They seem to be the ones with a calming influence on Ligabue , although one hinders his dreams of marriage and hidden sexual desires when he is charmed by her daughter. Powerful men however are arrogant and distasteful, such as various headmasters and doctors.

In September 1900 he was placed in the care of the Swiss Johannes Valentin Göbel and Elise Hanselmann. He began to work occasionally as a farm hand and endured a wandering life.

After World War 1, sent to Italy against his will, Ligabue lives for years in wretched poverty on the banks of the river Po, with support from the City Hospice of beggars, having no fixed abode and little work, but remaining true to his great passion for drawing.

Meeting the sculptor Renato Marino Mazzacurati in 1928 sets him on the path to deliverance as Mazzacurati encourages Ligabue to experiment with painting. Dismissed as worthless and often humiliated, Ligabue became an imaginative artist who painted a fantasy world of jaguars, tigers and gorillas among others – a free, explosive artistic spirit seeking to express himself. (And yes the dress wearing scene apparently did actually happen ).

There are possible allusions to the works of Henri Rousseau and Vincent van Gogh.

The film depicts Ligabue’s horrific visions and dark side, as well as his need to be understood, accepted and acknowledged ,rather than patronised and laughed at .We see how he follows farm animals around even chickens and spiders and captures their essence in his work.  Germano in his superb performance depicts Ligabue with the silences, the angry attacks, intense glare, and the shuffle and slouch with sometimes a weak lower lip and teeth-baring. Ligabue is passionate about his work and doesn’t cope with crowds or fools easily yet he does sometimes appreciate the better things in life. (He is also into speed and power with his cars and motorbikes, apparently paid for in paintings.)

In 1937 he was hospitalized in a mental hospital in Reggio Emilia for self-mutilation. In 1941 the sculptor Andrea Mozzali assisted him, organising his release from the psychiatric hospital and installed Ligabue in his home in Guastalla , near Reggio Emilia. During World War 11 , Ligabue served in the Italian Army as an interpreter. In 1945, after assaulting a German soldier with a bottle, he was interned yet again in a mental hospital and remained there for three years.

In 1948 he began painting more intensely, and journalists, critics and art dealers began to be interested in him. In 1957 Severo Boschi, a journalist at the Il Resto del Carlino newspaper, and photographer Aldo Ferrari went to Gualtieri to meet him. The result was the currently best-known photograph of Ligabue.

In 1961 his first solo exhibition was held at the La Barcaccia gallery in Rome. He had a motorcycle accident and the following year he was stricken with paralysis. Guastalla dedicated him a major retrospective in 1963. By now ill, asked to be received in the Catholic Church and, shortly after being baptized and confirmed, Ligabue died in Gualtieri on 27 May 1965.

In 1965, after his death, a retrospective of his work was held in the context of the Ninth Quadrennial of Rome.

It is currently screening at various arthouse cinemas.