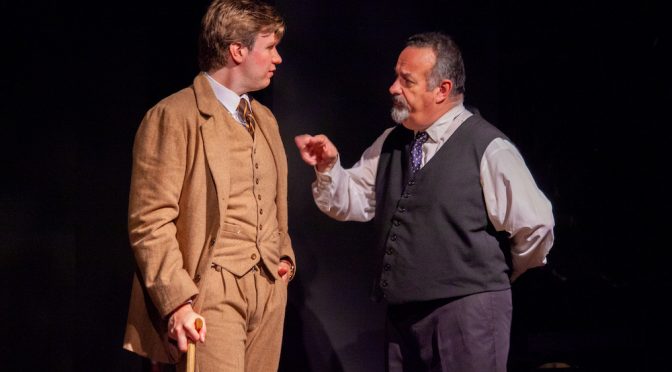 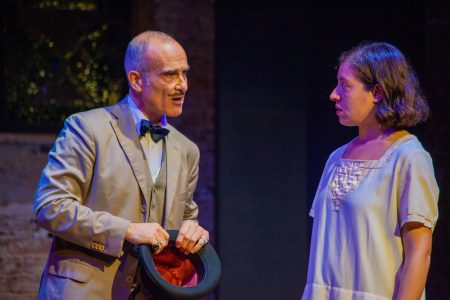 The Genesian Theatre Company has performed numerous Agathie Christie plays over the years. The murder mystery genre in Christie’s very capable hands has proved very popular with its loyal audiences.

Christie, however,  is not the author of its current show It is a stage  adaptation, by prolific American  playwright Jon Jory, of Christie’s first novel The Mysterious Affair at Styles.   The play’s title is appropriate, the novel  heralded the first appearance of Detective Hercule Poirot who would become Christie’s most famous character.

Poirot, a Belgian refugee of the Great War, is settling in in a village in England near the country manor of Emily Inglethorp, a friend who assisted him in starting his new life. Poirot’s friend, Hastings, arrives as a guest at her home. When Emily is killed, Poirot uses his great  detective skills to solve the mystery! Plot twists and red herrings abound in Jory’s whipsmart adaptation.

Tom Massey, who in various guises, has had a long standing involvement with the Genesian Theatre Company, delivers an  engaging, winning production of Jory’s work.  Massey wins good performances from his largish cast.

Peter Gizariotis gave a good, well measured performance as Poirot. Delmar Terblanche impressed in the role of Hastings. Thomas Southwell gave a quirky performance as Scotland Detective Inspector Japp and also played the role of  Dr Bauerstein, a well known toxicologist who resided close to the town of Styles.

Genesian Life member Ros Bilbe gave a poignant performance as Emily Inglethorp, the wealthy elderly woman who owns the Styles Court estate and becomes the victim of the case. I was a little uncomfortable  with Frederic Claudel’s rather showy performance as Alfred Inglethorp, Emily’s much younger second husband. More than likely, this was the way it was written…

Meg Girdler played the roles of Dorcas, the loyal maid at Styles and Manning. Emmanuel Said impressed in two legal roles as Coroner Wells and  a Judge.

Barry Nielsen was Tom Massey’s Assistant Director. The small  Genesian stage was left free to facilitate the fast paced action with actors ‘wheeling’ props on and off the stage. Some of the action was mimed with flair. Exits and entrances were well timed with neat ‘divisions’ on both stage wings.

Recommended, HERCULE POIROT’S FIRST CASE is playing the Genesian Theatre Company until the 2nd July, 2022 . Performances are Fridays and Saturday nights at  7.30pm and Sundays matinees at 4.30pm