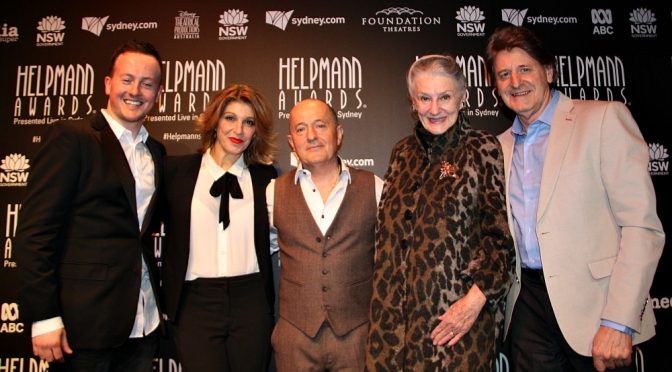 On Monday night, the industry group Live Performance Australia (LPA) announced the nominees in the 42 categories of the Helpmann Awards. The Awards are accolades for live entertainment and performing arts in Australia recognising achievement and excellence across a range of live performance sectors including musicals, comedy, opera and classical music, theatre, ballet, dance and physical theatre, presentations for children, regional touring and cabaret.

The winner of the Best Special Event Award, already announced, has gone to the Melbourne International Arts Festival for its production of Taylor Mac’s A 24-Decade History of Popular Music.

This year, the Sydney Theatre Company (STC) dominated the Theatre categories with 27 nominations. Hugo Weaving and his son Harry Greenwood were recognised for separate STC shows while David Campbell was nominated for best actor in a musical for his role as Bobby Darin in Dream Lover, and again for Assassins now playing at the Opera House.

The musical remake of Muriel’s Wedding received 11 nominations including best musical, best new Australian work, best original score, best director and best female actor in a musical. There is strong competition across categories with Hamlet and Bennelong also scoring many a nomination. Locally created music and dance work seem to have a much- anticipated edge with this year’s awards.

The Helpmann Awards Ceremony has come under criticism in the past due to its length. This year for the first time it will be presented over two nights. Act 1, the curtain raiser will be a sit-down event celebrating the very best creative, designer and support artist who work behind the scenes, and in support-roles. Hosted by the industry’s most distinguished luminaries, it will be an intimate cabaret style event in the gala surrounds of Sydney Town Hall on Sunday July 15 2018 between 6 -7.30pm.

Act 2 of the 18th Annual Helpmann Awards will be staged at Sydney’s Capitol Theatre on the set of Priscilla Queen of the Desert the Musical. The ceremony will feature the cast of Priscilla with performances that celebrate and promote the best of the live entertainment industry and will also honour the recipients of the 2017 Centenary JC Williamson and Sue Nattrass Awards. This will be  a black-tie event that starts at 8pm on Monday 16 July 2018. The Red Carpet will be from 6 -7.30pm, and the After Party will take place at Sydney Town Hall between 10pm to 1am.

New Artistic Director of the Helpmann Awards David Atkins will direct both the curtain raiser at the Town hall as well as the Awards Ceremony at the Capitol Theatre. Acclaimed for his internationally outstanding work, including the Sydney 2000 Olympic Games opening and closing ceremonies, David has directed, produced and choreographed many of the largest live events of the decade. He will bring fresh new creative energy to Australia’s premiere Performing Arts Awards.