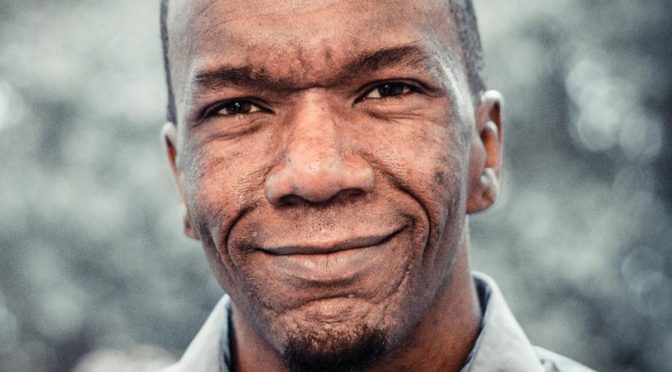 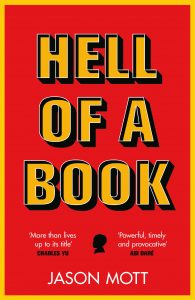 “Just a raging, brilliant, shitstorm of a book!” says a minor character in Jason Mott’s HELL OF A BOOK.

They got that right!

HELL OF A BOOK is a helluva book, a crazy, curly, profane, profound and provocative book, a book that will cause a hell of a reaction in anyone who reads it.

This altogether factual, wholly bona fide story of a big dreams, hard luck, American-made mad kid, is a book within a book, a puzzle wrapped in a riddle, a chewy nougat of a novel, where hardness softens but still threatens to pull the truth out and get stuck in your craw.

The narrator of HELL OF A BOOK is an author – leaving the decadent comfort of thirty and reluctantly knocking on the grizzled front door of forty – who has written a hell of a book called Hell of a Book and is embarked on a publicity junket to capitalise on its best seller status.

The author suffers from a condition – a condition of imagination. To him, reality and imagination are fluid. Fact and fiction spring from the same family.Is the invisible boy that visits him real or imagined, figment or family?

The author is never named and the boy is referred to as Soot, a sobriquet tauntingly applied by a school bus bully.
“The use of names make it true. Not just true but real. I’m not sure we can face that reality” says Soot.

Facing reality is tough and HELL OF A BOOK proves one of the best ways to face it is through fiction. Mott faces up to it and faces off racism. “Reality”, he writes “is something you continue to struggle with. At least say something. Do not remain invisible. Do not remain silent.”

Achieving invisibility is something instilled in Soot by his parents, attaining it being tantamount to safety. Being invisible, they think, hope, means you can’t be a target for a pistol packing policeman.

But achieving invisibility will never be an option for Soot – “the pitch black boy, living a life looking like that in a world that works like this one does. I wouldn’t hang that noose around anyone’s neck.”

The author is admonished by a reader who says: “It’s a hell of a book. You’ve got a gift for words. You’ve got the ability to say things that others cant say. You can pull out the things that other people have all trapped up inside of them…Your book hit me in my heart! But there isn’t anything about the Black condition in it. There wasn’t anything about being Black.”

Later, the author is advised by a media trainer not to write about race, specifically about being Black. His tirade is a satirical crock pot of crackpot gobbledegook: “The future of this country is all about patriotic unity inducing language. Post racial. Trans Jim Crow. Epitraumatic. Alt reparational omni restitutional. Jingoistic Body Positive. Sociocultural Transcendental. Indigenous Ripostic. Pan political. Uber Intermutual. That is the vernacular of the inclusive, hyphenated, beau American destiny we’re manifesting – a beautiful word soup. But not without lumps.”

With prose that looks good on the page and dialogue that feels good on the tongue, HELL OF A BOOK manages to conjure the unseen and the undeniable all at once.

The unnamed author of the book within the book says “Writing it was like carving out a piece of myself. And once it was cut away, I left it there. I moved on, perhaps a little more incomplete than before, but at least able to ignore the pain of the emptiness more than I could bear the pain of memory.’

HELL OF A BOOK certainly carves a place in memorable fiction – astounding, astonishing, acerbic satire, furious and funny as hell.

HELL OF A BOOK by Jason Mott is published by Trapeze.