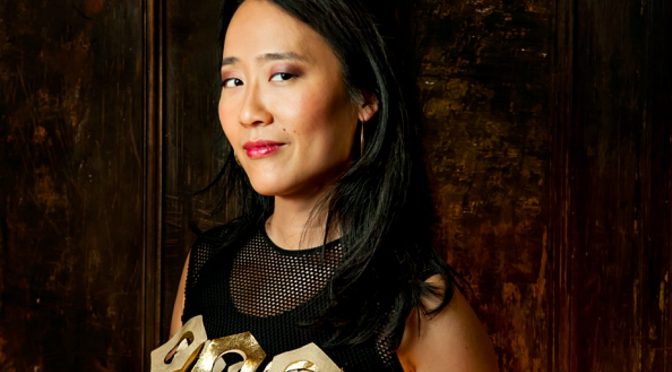 The Sydney International Women’s Jazz Festival kicked off at the fabulous Foundry 616 in Harris St, Ultimo with a great set from the Sydney Women’s Jazz Collective  before they were joined by the outstanding American pianist Helen Sung.

I thought that the Sydney Women’s Jazz Collective was playing at a level above their normal entertaining selves.  Opening with a lyrical folk song allowed Louise Horwood on trumpet to display her impressive skills. This was followed by Berlin based Silke Eberhardt’s composition Max Bialystock, featuring Alex Silver on trombone, Kali Gillan on baritone sax and Ali Foster on drums. Ali was especially impressive.   Of course, any reference to Mel Brooks’ The Producers should bring a smile to the audience.

A Paul Cutlan song, Knock on Effect, opened with some staccato guitar work before the horn section took it away in a different direction. The collective came into its own with Freyja Garbett’s Bulga. Opening with a blasting wall of horns the band toned it down with a smooth interlude before raising the tempo with a Laura Corney soaring sax solo and then taking it down again with some very mellow piano. Freyja switched from piano to some quirky synthesiser to complete a complex and diverse number.

Loretta Palmeiro’s tenor sax was the highlight of Lift, a song that also featured some mellow piano and Hannah James’ punchy double bass.

Saltwater, a brand new piece by Harri Harding was premiered at this opening night of the Sydney International Women’s Jazz Festival. Harri was there to introduce and conduct the piece. Initially this was to be a piece about loss, reflecting experiences that recently occurred in Harri’s life. Harri was pleased that the composition’s aesthetic turned out to be hopeful, which he felt was much more satisfying. It was a special treat to experience the richly varied composition with its sounds evoking birds and water.

The second set featured American pianist and composer Helen Sung. Helen explained she has had an eclectic music career and originally started in classical music. She told us how the Californian North Coast Brewing Company commissioned her to write a theme song for their Belgian style beer. Belgian beers were originally made by Trappist monks but as America had its own monk and the brewmaster was a jazz fan she composed Brother Thelonious. Helen then played Diego Rivera’s arrangement of Brother Thelonious with some very Monk like bass and heavy piano.

This was followed by a Thelonious Monk song, Oska T. Helen introduced the song by explaining that Monk’s music is geometric, that is it goes in all directions. This was a soaring version that got the audience moving in their chairs. Helen made the piano talk and the horns put on their A game, with Ellen Kirkwood outstanding on trumpet.

From her latest album, Sung with Words, she performed Convergence. As the notes, rhythms and harmonies collided in a manic high energy piece it stylishly lived up to its name. Sung’s performance of Monk’s Reflections was a sublimely beautiful rendition with the impressive Loretta Palmeiro featuring on saxophone. Next up was a highly energetic and creative rendition of Duke Ellington’s It Don’t Mean a Thing. Helen Sung’s clever blending of the classical jazz and the discordant avant-garde was an exciting way of looking at this well known song. Her encore went even further back into the history of jazz to ragtime and Carolina Shout by James P Johnson. Her virtuosity as a pianist was celebrated by the audience with rapturous applause.

Helen Sung is a special talent and is highly recommended.

Helen Sung was at Foundry 616 on Wednesday 7th November.  She returns on Friday 9th November.