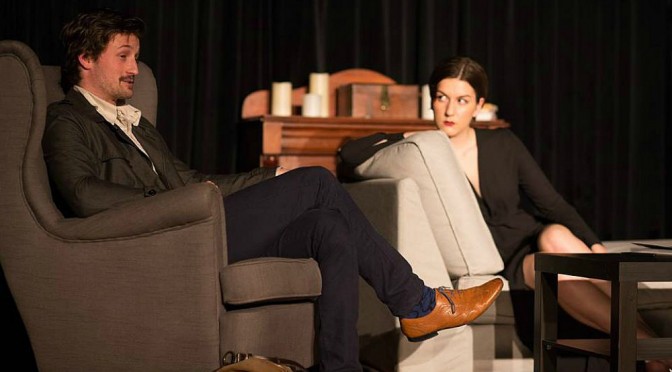 HEDDA after HEDDA GABLER is just wonderful. I loved it. It’s a slow, intense treatise on what theatre is … not for us the viewer but for the characters. The creations. The manifestations of imagination. The fleshed concepts pulled from a page and given presence. The actors don’t really exist, just the characters and the lives given them by the playwright.

The story is the same. The setting is modern but that doesn’t matter. Tesman sends texts and that doesn’t matter either. The accents are Australian … no matter. Nothing about this production matters except that Hedda and Tesman and Brack and Lovborg and Thea have been written. They might rail against what they are forced to do and Hedda’s hope for any change to the script lingers about the set. The script itself makes several appearances in fact.

But can they rewrite anything?

Writer/ Director Zach Beavon-Collin has created a mystery in which there are no surprises if you know Ibsen’s original work. Even if you don’t it is explained to you in the first sequence anyhow . This WILL happen. It might be mucking with a classic and that might be sacrilegious but this production could be about any classic play.

And what an extraordinary cast to carry this off. As Hedda, Alice Birbara is mesmerising. This script (Beavon-Collin’s not Ibsen’s) requires a blank knowingness on which the audience can write the Hedda that they and their experiences create. And Birbara displays a perfectly balanced strength and power in her malleability. Slimy Brack (Charlie Jones) willingly manipulates and informs the audience perfectly in a perfunctorily prescriptive reading of the text. He won’t allow the others to go off book and his rapport with the audience is palpable.

Mousey Thea (Christie New), ineffectual Tesman (Victor Kalka)and doomed Lovburg (Adam Marx) are equally skilled performers who create these characters by subsuming them and who can advance the plot with silence and a long intense gaze.

There are slow sequences bookending the 70 minute show and moments of stillness during but it is essentially naturalistic, despite its meta dialectic with itself. It never slips into any Pirandello absurdism.

Robot Sparrow’s production of HEDDA after HEDDA GABLER as part of the Sydney Fringe continues at the King’s Cross Hotel until Sunday 27th September. Remaining performances are tonight, Thursday night and Friday night at 8.45pm and Sunday at 7.45pm.