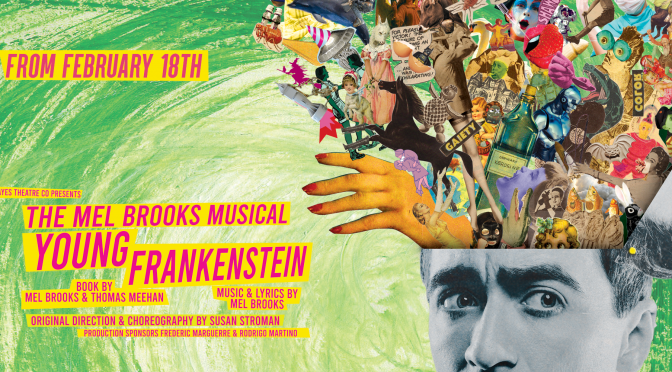 Hayes Theatre Co is thrilled to be returning to the stage in 2021 with a spectacular new production of Young Frankenstein, the musical by comedy genius Mel Brooks adapted from his own classic film which parodies the horror movie genre.

The production comes to the Hayes Theatre through the same creative team behind the 2019 smash hit American Psycho – director Alexander Berlage, choreographer Yvette Lee, and designers Isabel  Hudson and Mason Browne – this monstrous new production will hit the Hayes stage in February  2021 featuring a sensational cast of Hayes favourites and brilliant debutantes.

Scientist Frederick Frankenstein (“it’s pronounced Fronk-en-steen”), grandson of the infamous  scientist, travels reluctantly to Transylvania where he has inherited his family’s estate. Before long,  he finds himself back in the mad scientist shoes of his ancestor, and with the help of hunchbacked sidekick Igor and yodelling lab assistant Inga, he brings to life a new creature to rival that of his grandfather. But this time when the monster escapes, absolute hilarity ensues.

Young Frankenstein has all the panache and quick-fire humour of the screen sensation, with a little  extra theatrical flair. Featuring songs like The Transylvania Mania and the immortal Puttin’ on the  Ritz, Young Frankenstein is scientifically proven, monstrously good entertainment.

“I am so stoked to be joined by this incredible creative and cast chock-a-blocked with some of  Australia’s greatest all singing and dancing clowns to be finally bringing Mel Brook’s mad-cap comedy Young Frankenstein to life on stage at the Hayes in February 2021,” said director Alexander Berlage.

“I am especially excited to have supreme funny human Matthew Backer leading the cast as  Frederick Frankenstein. In a year filled with uncertainty, fear, isolation, orange dictators, lies and  collective anxiety we look forward to welcoming you back to the theatre with an outrageously  theatrical night filled with frivolity, campery, naughtiness and maybe a few surprises here and there.”

Chair of Hayes Theatre Co, Lisa Campbell, said, “We’re overjoyed to be reopening with a musical as spectacular and entertaining as Young Frankenstein. We can’t wait to lift the curtain on what will be  an incredible year of musicals and cabaret at Hayes.”

Young Frankenstein is generously supported by Frederic Marguerre and Rodrigo Martino through the  Artist Led Program.