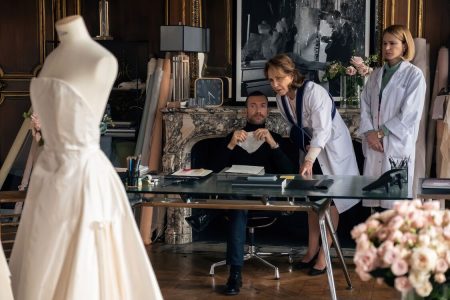 A disguised advertisement for Dior? It seams sew.

In HAUTE COUTURE, Nathalie Baye plays Esther, the end of her career Head Seamstress at Dior Avenue Montaigne workshop. One day, she gets her handbag stolen in the metro by a 20 year old woman, Jade.

When the culprit tries to make amends, the stitch witch offers her a job, an attempt at giving Jade more purpose in life and as surrogate assuage for her estrangement from her daughter.

It’s a job to Dior for and Jade soon displays a natural aptitude, much to the pleasure of Esther, and the displeasure of one jealous, jaundiced, and culturally prejudiced co worker.

Written by Sylvie Ohayon and Sylvie Verheyde and directed by Ohayon, HAUTE COUTURE is a rags to riches, rage to stitches story that follows familiar tropes. But, as they say, it’s not what you do but the way that you do it, that makes the difference.

Nathalie Baye is quite flawless as the formidable forewoman of the floor in this house of frocks. A meticulous craft-person and unstinting admirer of beauty in work, she sees all of humanity’s failure in knowing the price of everything but the value of nothing.

Esther and Jade parry and joust, jockey and bridle, bristle and redeem.

Two other characters, Catherine, Esther loyalist, and Andree, a bitch with an emotional stitch, give the drama contrast and texture. Both are consummately played by Pascale Arbillot and Claude Perron respectively.

For those with a passion for fashion and enjoy a classic fit, HAUTE COUTURE is la beauté du geste.