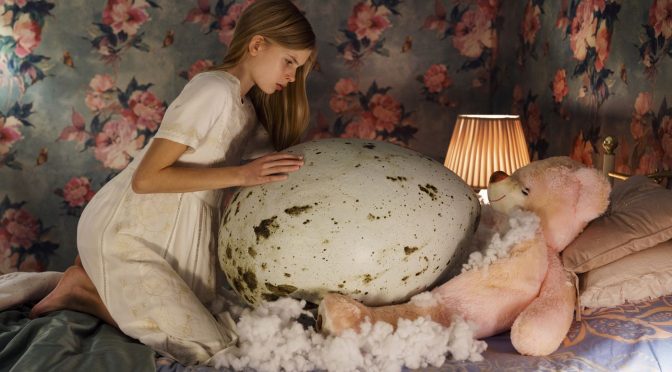 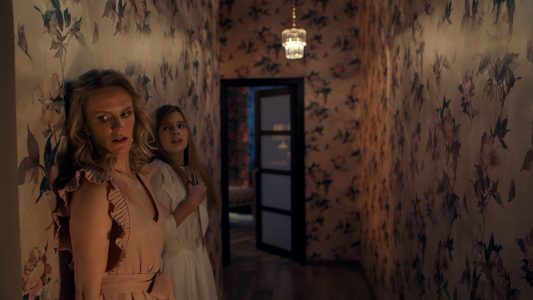 A little bit The Birds, a little bit Psycho, HATCHING hitches itself to Hitchcock in its best bits and aside from some silly sliding into the schlock, gets the spine tingling and the geese bumping.

From Finland, HATCHING (Pahanhautoja) centres upon Tinja, a 12-year-old gymnast desperate to please her mother, a woman obsessed with presenting the image of a perfect family to the world through her popular blog.

Initilly one thinks that mum is a sort of Stepford Wife, but it soon becomes apparent that she is more the manipulator, the facade of perfect family manufactured to suit her social media niche.

When a bird flies into the family’s overly set designed living room causing avian mayhem in a feverish feathered frenzy, mum breaks the bird’s neck more after Tinja has subdued it.

Shortly after, Tinja finds an egg, presumably that of the winged deceased and decides to incubate it, fashioning a nest in the belly of her teddy bear. And the egg begins to grow.

Hanna Bergholm’s film ramps up the sequence of unease for the first half hour before the egg cracks and the actual hatching happens, plateaus in fledgling flight in the middle section then pumps up again for a final confrontation full of sub-textual metaphor.

Siiri Solalinna is beautifully poised as Tinja, desperate to please her mother in the pursuit of gymnastic perfection and deal with the cuckoldry of her father. Confused and fragile, is it just hormones hatching homicidal thoughts or inate protection of the nest?

Stealing the show is Sophia Heikkila in a killer performance as the self obsessed mother, a her way or the highway matriarch whose projected picture perfect world she lives in provokes its very destruction. Vivacious and gregarious, her gorgeousness is a thin veneer of the vile, a guile that is mesmerisingly attractive.