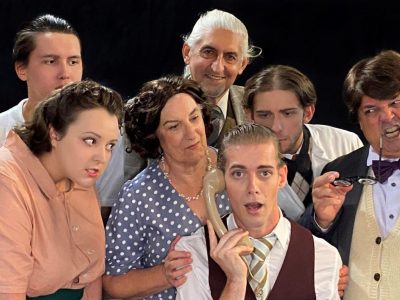 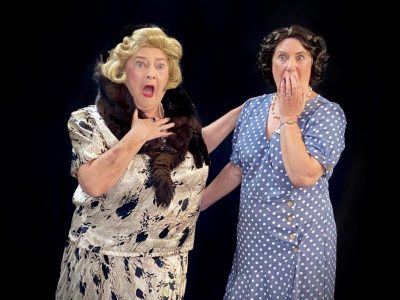 The playwright of HARVEY, Mary Chase,  was born in 1907 in Colorado.  Mary’s early years were spent with her 3 Irish Uncles who told her stories from Celtic mythology that featured ‘Pookas.’

Mary Chase’s play Harvey premiered on Broadway on November 1 1944 and ran until January 15 1949.  Harvey and Mary Chase received the Pulitzer Prize in 1945.

Ruby Productions have presented Harvey with finesse and convincing character performances. In her program notes Director Christine Snell asks the question ‘Is Harvey imaginary or real?’

‘The hilarious antics that ensue will ensure you enjoy a good entertaining show.’

All cast members and crew of Ruby Productions certainly deliver their Director’s adage with the audience’s prolific bouts of laughter and even hysterics  throughout the performance.

Act 1 Scene 1 opens in the Dowd family library with comfy and welcoming set design by Ann Attwood. There is a wooden fireplace mantle festooned with ivy, with a stern – maybe Dowdy! Grandma portrait above it, a slipper chaise lounge, Chippendale inspired cosy club chairs and vintage style telephone.  Elwood later gazumps Grandmas portrait with one of his pooka!

Aunt Ethel Chauvenet declares her regret that it is years since  Elwood Dowd has attended horse shows and gentlemen’s clubs.  She seats herself with a ‘plump-thump’ on a club chair and displays her exasperation as she observes Elwood as he coaxes Harvey into a seating re-arrangement. Harvey’s hat has rabbit ear holes!  And Myrtle-May is clearly heart-broken about Uncle Elwood’s ‘predicament.’  Veta-Louise is abandoning all hope that Myrtle-May will meet and be wooed by a suitable suitor.  Veta hatches an elaborate plot to have Elwood committed to a sanitorium to enable Myrtle-May’s chances of finding a good match in the absence of Uncle Elwood and his disconcerting Pooka apparition – Harvey.  Uncle Elwood and his Harvey prefer frequenting speakeasies for the company of crackpots and rum-pots.

In Scene 2 ‘Chumley’s Rest’ a sterile 1940’s style sanitorium is observed named after the apparent inimitable Head of Psychiatry Dr Chumley.  The stern and ineluctable Nurse Wilson puts patients through their hot and cold turbo tub paces!  Whilst the outrageously flirtatious floozie Nurse Ruth Kelly seems vacuous of nursing skills but is very attentive to Elwood’s presentation of a flower posey.  Dr Sanderson is Dr Chumley’s subordinate, that is, until there are several topsy-turvy diagnoses.

Dr Chumley and Veta have provocative exchanges with the gentle Elwood who mimes to his friend the elusive and capricious Pooka Harvey.  Ironically the elaborate plan to commit Elwood into the confines of ‘Chumley’s Rest’ goes awry as the farce encapsulates upon Veta instead!

In Act 3 back in the bland rooms of Chumley’s Rest the audience witnesses the playwright’s very unusual dramatic device – the sudden introduction of a new but pivotal character Lofgen the cab driver.  Lofgen is a gruff fellow who is demanding his cab-fare from Veta.  His onstage appearance near the end of this play is curious.  Meanwhile, Veta has mislaid her coin purse, or has she?  It could well be Pooka mischief!

Judge Gaffney listens with intent to Lofgen’s description of patients in his cab both before and after their dreaded ‘977’ injection.  Judge Gaffney gleans his verdict and explains to Elwood that if he is given the injection ‘he won’t see this Rabbit anymore.’   But continues the Judge ‘you will see your responsibilities, your duties.’  But Elwood replies that he ‘ wouldn’t care for it.’  We are all capable to construct our own reality as Elwood does.  Elwood chooses his Pooka Harvey.  And Ruby Productions chose Harvey directed imaginatively by Christine Snell with versatile and character driven wonderful performances by every cast member and skilled crew work.