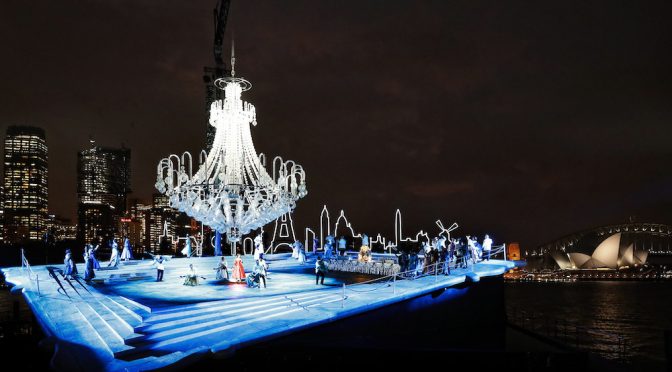 After such a deluge of rain and flooding around New South Wales last week, thoughts drifted towards perhaps the need for Noah’s Ark. There must have been much nail biting as to the weather leading up to opening night of La Traviata on Sydney Harbour. With an immense, heavily raked (ie. tilted towards the audience) stage, many stairs and no shelter overhead for cast nor audience, the company stated the show would go on regardless.

Blessed we were, the gods were smiling on poor Opera Australia who suffered so very badly last year. It was this production they had to cancel for lockdown whilst they were in the final stages of dress rehearsal. This time around we made it to opening night. The skies cleared, the sea was calm and gently lapping against the sea walls; the temperature was balmy with not a wisp of wind to be found and small contributions were made from the park’s fruit bats.

There were ample photographic opportunities on the red carpet for celebrities, officials and a surprising number of drag queens. Ushers joked about being well practiced at using many types of phones and cameras to snap photos for audience members with our iconic Sydney Opera House and Harbour Bridge upstage, tinted with the ever changing sunset hues from orange and pink through to lemon, lime and mauve as twilight advanced. A French accordion could be overheard from somewhere setting a French mood. Armed with a glass of bubbly from the surrounding bars, we took our seats and played a guessing game of all the building profiles outlined in LED lighting along the 30 metre background to the set – Eiffel Tower, Notre Dame, Sacré Coeur, Moulin Rouge, Arc de Triomphe, Luxor Obelisk, l’Opera and possibly Sainte-Chapelle? They drew the eye further toward the silhouettes of Sydney city’s own skyscraper buildings. A perfect setting!

With the orchestra hidden underneath the stage well protected from the elements, conductor Brian Castles-Onion struck up the familiar frail opening chords and provided excellent, precise cues for performers projected from a monitor behind the audience. His interpretation and tempo were great, orchestra members were outstanding as usual. Armed with ear pieces and headset microphones for each singer you would think there would be plenty of room for audio goofs but the sound designed by Des O’Neill was just superb. Microphone-wise only our leading lady sounded a little breathy. Whether that was by design or perhaps her microphone was sitting a little high, it is easily resolved.

Originally performed way back in 1853, the opera has been updated to a 1950s setting. This makes the moral context of the story feel a little off-kilter being on the brink of the sexual revolution.  Costumes by Designer Tess Schofield were bold block colours filling out the enormous stage. The ensemble were sometimes dressed uniformly and at other times dressed with incredible diversity. There were a few red herrings thrown in such as the opening costume for Flora which didn’t seem to match anything else and Toreadors at the Gaming party in Act II who were first mistaken for 1980’s Jazzercise boys with curious Princess Lea hairstyles. From a distance they would have been more quickly recognised if a bolero was included with the costume.

The set design by Brian Thomson used oversized furniture and tables stashed in under the stage stairs. Three cheers for the team of fit and able stage hands who deftly swung open and closed 30 metre sections of solid staging to retrieve the furniture.  It was a genius way to change scenes where there is no curtain to hide behind. The major feature of this production was the three and a half tonne chandelier carrying 10,000 crystals which was expertly manoeuvred by a full size, silently operated crane.

An incredible lighting rig towered above on each side and in front of the stage housing more than 600 lights. Lighting designer John Rayment is a complete genius in creating effects that enhanced rather than upstaged the action. Memorable colour blocking moments included our Paris buildings and the chandelier all glowing gold contrasting with Violetta in her fire-engine red party frock as she was being lifted into the air on the chandelier (her role is not for a faint hearted soprano). Also the dramatic gaming party lit in deep blood red with the gaming table becoming a pseudo sacrificial altar as Alfredo humiliated his ex-lover in front of all and sundry.

Choreographer Shannon Burns is well experienced in moving blocks of dancers (and non-dancers) around large events to great effect. However it was surprising to see contemporary dance used for this production rather than matching the 1950’s style of costumes and set. With the heavy duty grip floors (made from recycled tyres) preventing slips, each pirouette, drag and slide could be heard so it’s likely the dancers may go through a few pairs of shoes during this season!

The Opera Australia dancers were outstanding, sharp and unified throwing everything they had into the very detailed movements and isolations. The Opera Australia chorus were marvellous too, not just audibly but fully enjoying themselves in each scene bringing out a variety of characters so there was always something to look at.

Director Constantine Costi assisted by Warwick Doddrell and Tabatha McFadyen worked to revive and update the original production which was the very first outdoor Handa Opera production in 2012, originally directed by Francesca Zambello. The team faced a challenging task in coordinating a cast of 60 plus crew on this 30 metre square set. Curiously enough, parts including the ensemble flowed well. It was the intimate, more dramatic scenes which required more attention to accentuate the changes in emotion in a natural way that could be read and understood by those in the back row of the audience.

In La Traviata (The Fallen Woman) it is literally “all about the girl”. Leading Lady on opening night was star soprano Stacey Alleaume as Violetta. With only just a few years of professional work with the company she has risen to the spotlight quickly, and for good reason. Pre-covid we saw her as Susanna in ‘The Marriage of Figaro’. She was superb then but this role has blown her reputation sky high. Absolutely outstanding, she threw herself into the role which demands coloratura singing technique and heavy dramatic acting challenges. Being familiar in working with period costumes where acting can be limited to the upper body, Violetta has the added challenge in Act II being left relatively exposed in a slim fitting shirt and cigarette pants. Here is where she needs to act with her whole body. There were also a few puzzling parts which may be more to do with direction such as storming down the stairs making a beeline for her lover as if to either run him over or bop him on the nose but, instead, marching right past him as if she ‘missed’, then stopping short and staring into space. The dramatic scenes, each with Germont the senior and junior, are difficult to fill with natural action as they are lengthy but the performers are bound to develop their characters further as the season progresses. Alleaume’s singing blew away the audience, commanding a standing ovation at the close.

Opposite Alleaume was the classically tall, dark and handsome Kosovo tenor Rame Lahaj as Alfredo Germont making his debut with the company. This man was not given his job for his looks alone. The silvery, star quality tone of his voice was immediately apparent within the first few notes he sang. It is easy to visualise Lahaj becoming world famous, he has a divine voice. There were a few issues with the headset and it was noticeable when getting snuggly with his leading lady that his microphone was set to manage a much larger volume than hers, but all was forgiven. His arias were gob smacking and, arguably, you will not find a better voice to perform them anywhere.

Third principal role for this opera was the father Giorgio Germont played by Michael Honeyman. Considering there are two alternating casts which feature one blonde and one dark of each tenor and baritone, it was surprising to match blonde Honeyman to dark Lahaj. Honeyman’s voice took a while to warm to as the first scene progressed and the acting of heavy drama was again, possibly, leaving room to expand the character. It’s not clear if it was the direction or the performer’s choices in interpretation but empathy for this character was not fully realised so that there were a few light hearted boos and hisses at the curtain call.

In supporting roles, Celeste Haworth played Violetta’s friend Flora. Much of her focus seemed to play more to the audience rather than in the scenes, but she has a lovely, full vocal tone and looked fantastic in a tuxedo. Danita Weatherstone did well as Violetta’s maid with clear, articulated singing and excellent acting. Alexander Sefton used his full frame as the perfect, rich bully Baron, John Longmuir made the perfect dandy as Gastone. Other featured supporting roles were played by Andrew Moran, Gennadi Dubinsky, Jin Tea Kim, Jonathan McCauley and Malcolm Ede.

All in all, this is a production designed for the people. It’s glamorous, magical, enthralling and has a few unexpected surprises in there as well. It’s an ideal start if you’re taking someone along who is new to seeing opera. Everything about this production is worth seeing and hearing.

Tickets are from $99 plus booking fee. Masks are not mandatory and food/drinks are to be purchased on site. The opera is sung in Italian with English and Mandarin subtitles. With the site being set well down the road past the Art Gallery of NSW, you can catch the complimentary shuttle bus, have a car/taxi drop you at the entrance, or take a stroll down the tree lined lane from Hyde Park. If you park at the Opera House, prepare to take the long way back again or hire a water taxi as your shortcut via the Botanical Gardens closes before the end of the show.

Enjoy this magical production while you can.