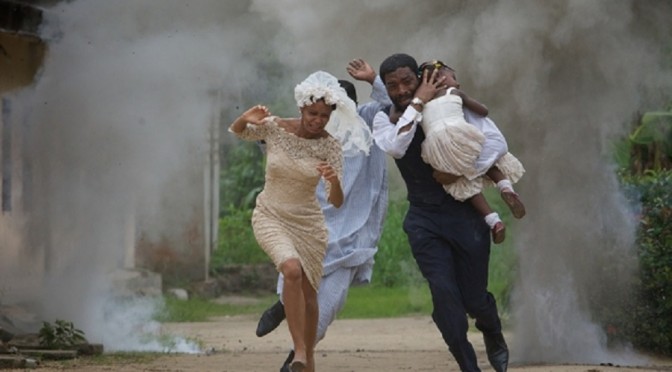 HALF OF A YELLOW SUN (M) is primarily a love story set against the upheaval of the creation of Biafra and the strife of war and famine that followed.

Old tribalism and its contingent superstition married to the unctuous avarice maker, oil, virtually still-birthed the burgeoning nation and made it the basket case of Africa in the late 1960s.

This is the story of two well educated daughters of a prosperous Lagos businessman. One of them, Olanna, falls for a radical academic, Odenigbo, the other, Kainene, hooks up with a British journo, Richard.

A good deal of the first half focuses on the story of Olanna and Odenigbo, whose tumultuous relationship, made so by the meddling mother of the man, seems to be a foretaste of the horrific political upheavals ahead.

Thandie Newton and Chiwetel Ejiofor make an attractive couple in an unattractive situation.

As her sister and her Brit boy, Anika Noni Rose and Joseph Mawle, portray a slightly more glamorous but so very cynical approach to their predicament.

This is an excellent reminder of what precipitated the fledgling nation falling into famine and is made all the more vibrant by the use of newsreel footage, one hosted by Frederick Forsyth, who covered the conflict and would later return to it in his book, The Dogs of War.

We don’t get many films from Nigeria but HALF OF A YELLOW MOON from director Biyi Bandele is an impressive calling card from that country’s emerging industry.

For more about HALF OF A YELLOW SUN, visit http://leapfrogfilms.com.au/cinema-locatorhalfofayellowsun/