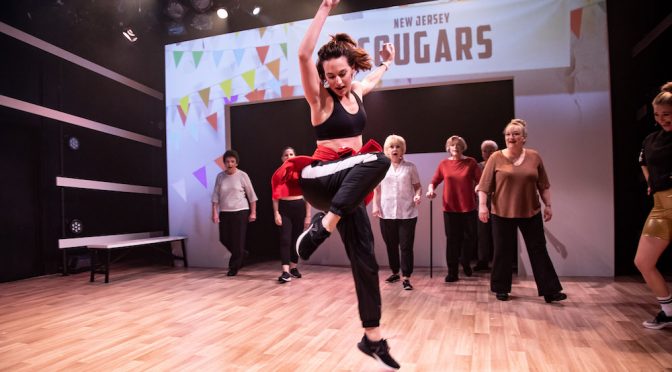 It is always exciting to see an Australian premiere of a musical, especially in the intimate chamber space that is Potts Point’s Hayes Theatre.

This is the case with the American work HALF TIME, book by Chad Beguelin and Bob Martin, music by Matthew Sklar with additional music by Marvin Hamlisc, and lyrics by Neil Benjamin. The show was based on the motion picture documentary ‘Gotta Dance’, directed by, written by and produced by Dori Bernstein.

HALF TIME  tells the true story of ten ordinary seniors who audition to dance at half time for a major basketball team. Only after making the cut  do they learn that they won’t be dancing tap, salsa, or swing – instead they have to learn a dance style that is entirely foreign to them, hip-hop. Their head coach is Tara, played by Stefanie Jones, who in her late twenties is deemed too old to be part of the main dance team.

The troupe’s journey sees them battle self doubt, stereotypes and conflict within the group to achieve their goal.

We live in a culture that is obsessed with youth. The theatre world is no different with most plays being performed by young people. We are all stoic about it, we just accept that this way it is.

It was so refreshing to see older bodies dancing up a storm on the small Hayes stage. And they were older bodies that had between them clocked up many years in Australian theatrical history. Most notable amongst them Nancye Hayes, playing in the very theatre that has been named after her.

The show was lovingly and artfully directed by Helen Dallimore.

A note to end on. I watched an ABC documentary recently where an elderly woman, in her nineties, living in a nursing home, was asked how she felt about life in her twilight years. Her answer was, “I feel like I am a young person in a very old body”. The show said she died shortly thereafter. What a great answer. May we all stay forever young!

My feeling is that this show will book fast, so be quick.

Featured image : Stefanie Jones and the cast of ‘Half Time’ at the Hayes Theatre. Pic David Hooley