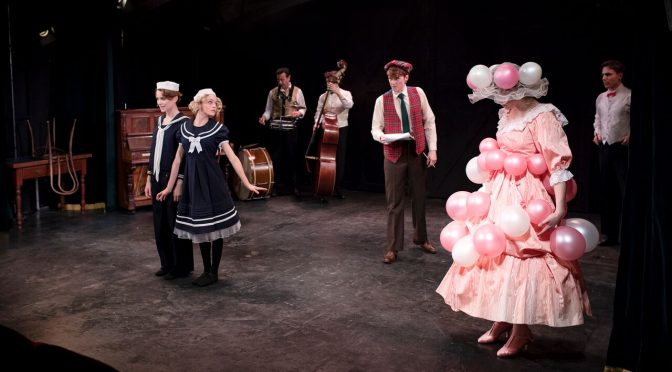 GYPSY is an award-winning musical, music by Jule Styne, lyrics by Stephen Sondheim, and a book by Arthur Laurents.  The work is drawn very loosely from the memoirs of Burlesque super-star, Gypsy Rose Lee who, as Louise, for most of her young life and dressed mostly as a boy, played second fiddle to her sister June.   June and Louise are paraded around the dying Vaudeville circuit by Rose, the archetypal monstrous stage parent of ‘Baby June’, a kiddie act which lost its cute factor a long time ago.

Blazey Best is Rose in a stunning performance which eschews the usual broadness and bluster of this larger than memory mother.  Best gives the role the kind of in depth character study that can break your heart with a throwaway line. “Button up your coat” expressed with kindness and love in the middle of a diatribe or the plumping up of self-esteem, silent and hunched in a dark downstage corner. Even the stand-on-a-table-and-belt solos are slightly swallowed, not quite as brassy as the sound to her ears.  Nor as single minded and open as their physicality.  There is a clenched jaw tightness to this Rose that informs all the characters around her.  All are wary of the Rose unleashed.

This is beautifully understated by Anthony Harkin as Herbie.  Obviously adoring of Rose, he subverts her excesses with a kind smile to her victims, patience personified and a temperateness of interaction with everyone else in Rose’s orbit.  Especially June and Louise.  June is played by Sophie Wright and Louise by Laura Bunting and the sisters relationship is so well created and enjoyable to watch.  Their duet ‘If Momma Was Married’ is one of the highlights of the production.  Baby June (Jessica Vickers) and the older incarnation both have the embarrassment factor just right. Vickers with people, and momma, pleasing on her mind. Wright with a career to aim for and to believe possible.  She brings the oversparkle of the professional child performer and imbues June with an ‘alley-oop … preeesent’ performance persona in complex contrast to  the young woman desperate for her own existence away from her mother.

By virtue of being sidelined and ignored, Rose is always in the background but in a mesmerising turn from Bunting, Louise is given the heart of a performer.  Even when being a boy backup dancer to Baby June, Bunting cleverly elucidates the artist within and there is an infectious enthusiasm in all she does.  When Gypsy Rose Lee begins to emerge from Rose’s shadow and from Louise’s hidden depths, there is an intricacy of transition and subtlety of elision that makes for a breathtaking climax to the piece.

In addition, Bunting has a remarkable command of the physical requirements of costuming and staging when Gypsy Rose Lee flowers.  And she’s not the only one, the ensemble work in this production is second to none.  With terrific individual roles by Jane Watt, who lets it all hang out, and Mark Hill who can tap up a storm, the ensemble, which also includes Rob Johnson and Matthew Predny, never wavers.  Despite taking on a slew of characters and effortlessly generating some alarmingly intricate scene changes.

Designed by Alicia Clements, the production is evocative of period and brings a melding of touring theatricals with the razzle dazzle of their showtime.  And it is seriously busy, Director Richard Carroll seamlessly moving his cast around the small stage with character and impulse. It is nice to see an actual arch as a proscenium and the use of mobile mirrored flats works extremely well to place the action.  In addition, the design allows for set pieces to ally with the choreography (Cameron Mitchell) for excitement and energy, in ‘Mr. Goldstone, I Love You’ for example.  And the acting area can be stripped out when needed. ‘All I Need Is the Girl’ worked very well as a blackbox sequence.  And the detailed domestic and theatrical costumes are to die for and keep on coming.

Musical Director, Joe Accaria has his band under tight control, except when he very cleverly lets them loose as bad Musical Hall Orchestra, and the voices are replete with character filled excellence.  The lighting might have a few too many modern elements in colour and movement for me but the choice of pink for the first burlesque sequence and the truly warm, pale lemon of Gypsy’s dressing room was delicious.  Surprise Pink is sadly not part of the spectrum for modern lighting. Sigh.  (Lighting: Trent Suidgeest).

Incredibly well regarded, GYPSY is a musical filled with popular, well known songs that we all know and could hum if required.  Song titles like  ‘Let Me Entertain You’ and ‘Everything’s Coming Up Roses’ bring the melody straight to mind.  But audiences to this production are given so much more than a concert of loved tunes.  This production of GYPSY has a heartbeat of story where the steady rhythm of character pulses with excellence and drama and it has briefly settled down in the Hayes Theatre [Facebook] until  30 June 2018.