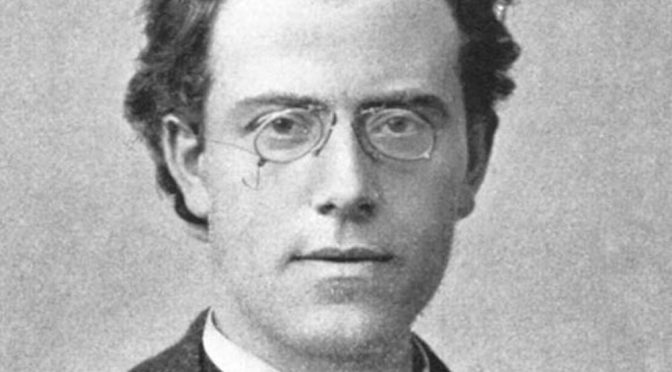 The hypnotic effect of Mahler’s great song-cycle/symphony Das Lied von der Erde has mesmerised many.  I have not been immune.  Every interpretation envelops my senses.  I have listened to 30 odd separate recordings of the work and I am still hoping the perfect one will pop over the horizon soon.  It is an unfinished labour of love.

Based on 7 of approximately eighty 8th century poems translated from Chinese by Hans Bethge under the title of The Chinese Flute, Mahler originally called the work Das Lied von Jammer der Erde (Song of Earth’s Sorrow) subtitling it ‘A Symphony for Tenor, Alto or Baritone and Orchestra’.

Mahler was a symphonist. He once told Jean Sibelius that the ‘symphony was everything’, and even his song-cycles were often used as sounding boards for inclusion as melodies in his symphonies. He loved to experiment with new sounds.  With Das Lied von der Erde, and specifically his last movement, Der Abschied (Farewell), Mahler utilises instruments that had hardly been heard in western music.  The tam-tam, the mandolin and the extensive use of a lone oboe captured the mysticism of the east that was fashionable at the time.

The catalyst for composing Das Lied and its bittersweet poignancy was a succession of personal tragedies. On July 5 1907 when Mahler lost his 4-year-old daughter, Maria nicknamed ‘Putzi’. A few weeks earlier he had been diagnosed with a serious heart ailment, and in August he was forced to resign the musical directorship of the Vienna Opera. Even for a man accustomed to an environment of death and suicide, the setbacks appeared overwhelming.  But then this was a man who, as a lad, when asked what profession he had chosen, replied ‘a martyr.’

Now, threatened with an early death he got on with living.  He moved to New York for three seasons to lead the Metropolitan Opera initially and then the Philharmonic to resounding successes. The summers were spent in his native Austria composing in his usual isolationist manner.

Das Lied is written in 6 movements.  The first 5 deal with a journey through youth, drunkenness, loneliness and memories of beauty.  The songs are alternately sung by a tenor and a contralto or baritone.  Each of the songs is a channel to the final movement, Der Abschied (Farewell), where the writer embarks on a journey to the distant mountains, marvelling at the beauty of nature.  Following an interlude where Mahler uses the orchestra to paint a landscape filled with reminders of travel and resignation, the writer bids farewell to his friend, and continues alone on his journey.  Mahler, himself, rewrote the final verses.  It is therefore no coincidence that he equated dying to taking a trip to the mountains.

Das Lied had become a self-fulfilling journey.  “It is,” he wrote to his protegée, Bruno Walter, “the most personal thing I have created until now.”  He was also conscious of travelling in uncharted waters.  Again, to Bruno Walter he wrote at the completion of the score: “What do you think?  Is this to be endured at all?”

The final movement lasts approximately 30 minutes and deserves to be treated separately from the others.  In fact, the orchestral interlude is also capable of being treated separately.  The use of exotic instruments evokes an irresistible sense of yearning.  The journey starts laboriously with a rhythmic pattern of bass notes reluctant to get started.  But once the pace settles, the clarinets introduce a musical theme reminiscent of horseback riding.  French horns announce the gradual approach of a mountain range. Reinforcing the solemnity of the occasion a lone oboe repeats a mournful motif while whispered double-basses give the piece a sense of spatial emptiness.

Mahler calls for a large orchestra but he uses it mostly as an intimate chamber-ensemble.  A great lover of Bach and nature, he fashions the individual characteristics of high pitched instruments to weave a tapestry of polyphonic sounds.

The correct tempo is important.  Too slow is much too stodgy and too fast loses the sense of the occasion.  A mixture of both is the right balance.  Rubato throughout keeps the piece moving.

The finale is as quixotic musically as the introduction is mysterious.  The whole piece slips in and out of C minor and major and the final dying notes of the soloist as she sings Ewig (Forever) from E to D, leaves us no closer to resolution.  In hushed dynamics, the sounds of muted strings and the tinkling of a distant celesta remind us of our mortality.

The majority of the score calls for a piano legato line from the soloist, occasionally delivered with a ‘lack of expression.’  Unfortunately, Mahler never heard his work performed or he would have realised that piano singing is not practical.  A mezzo-forte attack is ideal.  Big voices do not register favourably.  Similarly, an excessive vibrato is inappropriate.

What is required is a voice with directness, even in reflective passages, that can maintain pitch with minimum vibrato.  Being able to float high notes (the highest is a g) with no glissandi and no dynamic shrinkage is preferable.

So, which of the current crop of recordings meet this rigorous criteria?  Realising that the subject is highly subjective and will provoke no end of argument and debate, the answer is none.

Artistic perfection does not exist.  Only 6 of the recordings heard come anywhere close to the ideal. They have been chosen because they maintain listener interest throughout and, in most cases, have exposed qualities in the music that others have missed.  One has to remember that Mahler intended the music to reflect his mood at the time of composition.  It has to be poignant but not sad, carry an invisible clock driving it forwards and, above all, possess an undertone of resigned optimism.

The Fischer-Dieskau/Kletzki rendition is outstanding because it sounds as if the singer is actually in the room with the listener.  It is an intimate interpretation that personalises the story behind the voice.  The legato singing and the difficult tessitura (for a baritone) are effortlessly overcome.

The late Crista Ludwig has 4 versions in our review.  To her should go the award for outstanding consistency.  Her voice sounds just as youthful in the 1983 live recording with Vaclav Neuman and the Czech Philharmonic as the initial one in 1967 with Fritz Wunderlich and conducted by Otto Klemperer.  The latter is the pick of the bunch, even if Klemperer tends to be a bit predictable and loud.

Leonard Bernstein (despite his audible moaning and groaning) and the Vienna Philharmonic is the pick of the conductors in his partnership with Fischer-Dieskau.  It was recorded 8 years after the Kletzki collaboration and Fischer-Dieskau’s voice has lost its youthfulness.  He is far more dramatic and rhetoric in his delivery.  However, Bernstein’s creativity brings the best out of the orchestra.  His bass notes are expansive and deeply resonant and help to highlight the clarinets, oboe and french horns above them.  The polyphonic passage is particularly exciting because each instrument can be clearly heard. Bernstein once said: “I love Mahler’s music very deeply……with works by Mahler, I seem to be playing some of my own.”

The other outstanding conductor is Carlo Maria Giulini with the Berlin Philharmonic and Brigette Fassbaender as soloist.  He is a musician who understands Mahler.  He employs a soft bass pedal from the start that instills tension.  His use of rubato is immaculate.  The brass is brassier, especially in the orchestral interlude, and the dynamics when the tam-tam and the heavier percussion enter is thrilling.  But let us not forget the soloist; Fassbaender is consistency itself, especially when Mahler calls for ‘expressionless singing.’

The late Klaus Tennstedt has always been known as a Mahler specialist.  On his recording with the London Philharmonic, however, Agnes Baltsa outshines him.  Tennstedt tends to play down the numerous bass pedals but Baltsa’s voice is pure drama when it’s meant to be, unemotional when called for and excitingly true when soaring to the higher notes.

The choice of Iris Vermillion with Giuseppe Sinopoli and the Staastskapelle Dresden is in the nature of an encouragement award.  In a way, it’s a bit more than that.  Vermillion has an attractive voice that is still in a developing stage.  All the endearing qualities are present – the directness, the unemotional colour, the clear high notes. Her ‘Ewigs’ are like echoes in an endless chamber.  It comes as no surprise to discover that one of her mentors is Crista Ludwig.  She’s in good hands.

Lately we’ve been regaled with Jonas Kaufmann’s version.  When the CD was released it created much controversy because no recordings (that I know of, at least) had been released where both parts had been sung by the same singer.  It’s a good version unless, like me, you’ve got so used to ‘lieder’ singers being the principals, that an ‘operatic’ voice seems to have usurped what Mahler originally intended.

Finally, one cannot finish a piece of this nature without leaving the last word to a stroke of genius.  The conductor is Bernstein, the orchestra the Israeli Philharmonic, and the soloist, Crista Ludwig.  The performance of the orchestra is quite ordinary, Ludwig sings her usual storm, and Bernstein seems to be resigned to the lack of inspiration from the musicians.  Audibly he moans and groans.

But then, listen to the finale when the ‘Ewigs’ are dying, and the hushed strings are barely playing.  Listen particularly to the celesta.  It arpeggios up and down the scale.  Finally, all that is heard is the tinkling of one note, surrounded by a bed of strings.  And that note is repeated.

And repeated, and repeated.  Until it fades.  Like a dripping tap running out of water. Inevitably, mortality comes to us all.

Revised but originally appeared in the December 1998 edition of the 2MBS-FM magazine.