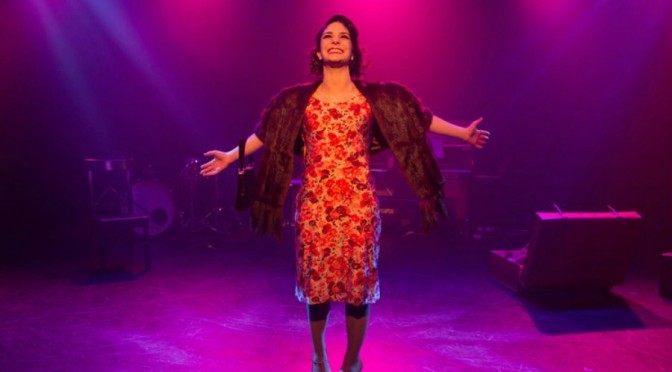 When we meet them, none of them seem capable of murder because they don’t see themselves that way. With killer smiles they cheerfully walk us through the events and emotions leading up to the deed. And then they stop … they cease to be. A new incarnation arises and we move to the next story. The audience walks blinking in the foyer not knowing where these creatures came from and where they are now. Curiosity is driver of this show and perhaps of society’s interest in female killers in general.

As each character, Cassimatis speaks directly to the audience and always in the past tense. She then acts out or sings the events which bear on the inevitable conclusion of each story. Her acting performance is flawless. She embodies each woman, ranging from the cheeky to the bashful, and emotion and belief underpin every artistic choice. She doesn’t make abrasive changes in her voice to speak as the male characters, just a slight variation in timbre. Her tears are real and appear at just the right time to pull the audience further into the story.

The choreography by Amy Campbell is not just there in the movement between scenes, it’s there is the way the props and set are placed and propelled to move the show along. It’s there in the killings and in the way the women morph into each other as a new costume accessory is donned. The basic costume is a simple red and pink flowered dress with brilliant back pleating. It is added to for each new character- A cardigan with matching ribbon on the sleeve, an apron with a matching fabric pocket or a lovely coat with lining to match the dress.

Cassimatis’ singing is delicious. From ballad to patter song, her diction is perfect and the high notes full throated. Every now and then she darkens with the character and drops a register and raises the volume and it is chilling. With original music by Hugo Chiarella and Robert Tripolino, Cassimatis’ work is well supported by the four piece band under the direction of Lucy Bermingham.

I wish the tech was as inspired. An artist of this calibre needs good micing and just a few evocative lighting states. What we got was poor audio and too many flashy lights. It didn’t affect anyone’s enjoyment of the show but I was disappointed by being distracted from the superb storytelling.

Angelique Cassimatis is well known from her work in Mary Poppins and King Kong and while I love a big sing, to have her close in this intimate, almost  cabaret setting, was just wonderful and a marvellous way to cap off my theatre year.  There is definitely a guilty pleasure in the female energy of this show but I noticed that the dozen brave men in the packed audience were standing for the ovation too!