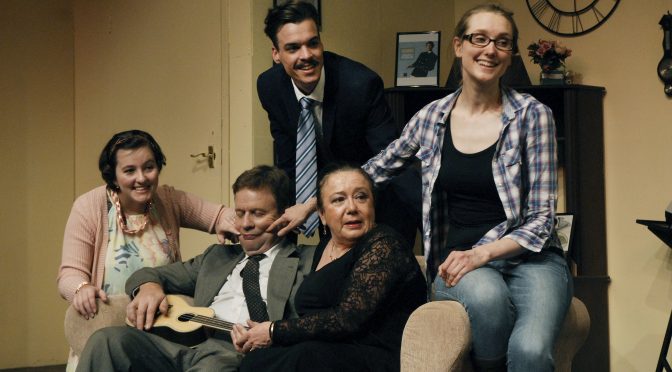 I had a great night at the Guild Theatre.

Australian  playwright Elizabeth Coleman’s 1993 play is a personal favourite. It’s clever…it’s more than a bit black…it’s very funny. It’s a lot of good things which accounts for it being a very  popular play for theatre companies to put on.

I have to say that the current Rockdale Theatre Guild production is the best production of the play that I have seen, and  I commend to you.

Susan Stapleton’s production really sparkles. Her creative team transport us to the play’s world so artfully.  We are in Ron and Dawn Patterson’s living room, meticulously laid out by designer James Searle’s period set.

Coleman’s premise is more than a bit on the absurd side. Patriarch Ron, dying of some nasty form of cancer, has calculated  with some kind of ready reckoner that  he has just 111 minutes to live, and has brought his family together to share his last two hours with him.

All sorts of unexpected revelations come to the surface which make Ron’s last two hours one major roller-coaster ride  which Coleman plays for laughs.

The audience, a full house on opening night at ths lovely quaint theatre, loved the show. IT’S MY PARTY AND I’LL DIE IF I WANT TO is playing the Guild Theatre, Walz Street Rockdale until November. Check the Guild’s website for performance times.

Elizabeth Coleman’s comedy is about the soiree Ron throws when he realises he has 111 minutes left to live.