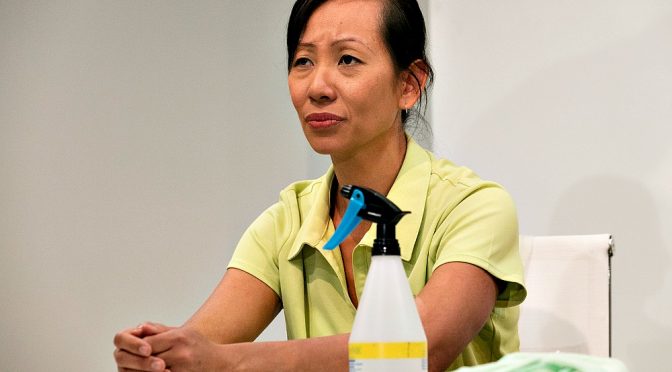 Michele Lee’s new play RICE tells a very old story. Two people may hold very different positions in society, come from disparate backgrounds,be vastly different in age, and yet there can be this alchemy between them which sees them make a connection, create an understanding, form a bond.

In one of my favourite plays, American playwright Lewis John Carlino’s Sarah and The Sax a plump, elderly Jewish woman Sarah Nodelman is sitting on a park bench in Central Park, New York doing some crocheting. Her bags of shopping sit idly beside her. She is taking a breather before she makes the final part of her trek home.

An Afro-American guy playing a saxophone is walking by. Sarah engages him in conversation – well by conversation I mean she talks to him and he replies by playing bluesy notes on his saxophone. He takes a seat beside her. They come from entirely different worlds, and yet by the end of their meeting they have connected, this huge chasm between them has been closed.

Lee’s play is built around two very well drawn, strong women. Nisha is a young, very driven Chief Executive Officer of Golden Fields, one of Australia’s leading food production companies. She is second generation Indian. Yvette, first generation Chinese, in her early sixties, is the office cleaner who comes in after hours and with whom Nisha interacts because she is always working back, burning the candle at both ends.

At first, their interactions are glib, superficial, even brusque. However, over the course of the play, they get to know other’s stories very well, the struggles, the wins, the losses, and by journey’s end, they have developed a deep affection and regard for each other.

RICE was engrossing theatre. Lee Lewis’ production was taut, there was good work by her creative team, and most of all the performances by the two actresses, Kristy Best as Nisha and Hsiao-Ling Tang as Yvette, were extraordinary. As well as playing their main character they each played a range of ‘supporting’ characters with great skill and nuance. It was an enormous privilege to see their performances.