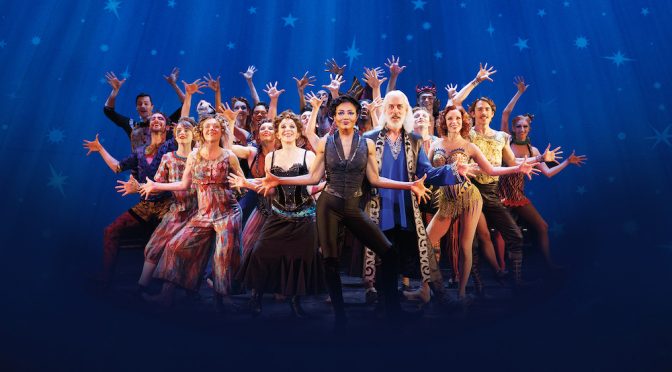 Simon Burke (Les Misérables, La Cage Aux Folles in London’s West End) will play Charles, Pippin’s demanding father, while Lucy Maunder (Charlie and the Chocolate Factory, Beautiful) will be playing Catherine, a widow and mother who falls in love with Pippin. In the role of Pippin’s conniving stepmother Fastrada will be Leslie Bell (Broadway’s Chicago and Ragtime), with Euan Doidge (Les Misérables, Kinky Boots) playing the role of her son Lewis, Pippin’s half-brother.

“We’re thrilled to introduce the sensational cast who will bring this exhilarating musical to life and open up Sydney musical theatre again. The Gordon Frost Organisation has always had the capacity to assemble high calibre casts during its 40 year history of productions, and PIPPIN is no different” said producer John Frost.

“This astonishing new production of PIPPIN was the most nominated Broadway show of the year, and has gone on to thrill audiences across the globe. Now it’s Australia’s turn to enjoy the magic of PIPPIN with this incredible cast led by Ainsley Melham, Gabrielle McClinton, Kerri-Anne Kennerley, Simon Burke and Leslie Bell who are all making their GFO debut. It’s wonderful also to welcome back Lucy Maunder and Euan Doidge to the GFO family.”

The Australian Premiere has been secured exclusively for Sydney by the NSW Government through its tourism and major events agency, Destination NSW and will be a major drawcard for visitors to NSW.

NSW Minister for Jobs, Investment, Tourism and Western Sydney, Stuart Ayres, said, “The staging of PIPPIN marks a major turning point as we re-open our beautiful Harbour City. Our lives have been on hold for the past six months – this is the perfect opportunity to  a COVID-safe night out at the theatre, dine at a favourite restaurant and even treat yourself to a hotel stay. You’re guaranteed to have a fantastic time, while doing your bit to reinvigorate the NSW visitor economy.”

Matt Bekier, Managing Director and Chief Executive Officer of The Star, said, “We’re thrilled to be involved with bringing PIPPIN to The Star and welcoming theatre audiences back to our complex. An extraordinary cast has been assembled and this production provides Sydneysiders an opportunity to once again support live entertainment, and enjoy the world-class amenities on offer at The Star.”

With a beloved score by Oscar and Grammy winner Stephen Schwartz (Wicked, Godspell), PIPPIN tells the story of a young man at a crossroads in his life. Does he follow in the footsteps of his father, one of the most powerful men in the land? Or does he strike out on his own, to find his own ‘corner of the sky’? PIPPIN is a play within a play. The story is told by a traveling troupe of actors and acrobats (called ‘Players’), directed by the mysterious Leading Player. Like a vaudeville act, the Players both act out the roles of the story and speak directly to the audience.

The captivating new production is directed by Tony winner Diane Paulus (Hair, The Gershwins’ Porgy and Bess). It features sizzling choreography by Tony Award nominee Chet Walker in the style of Bob Fosse and circus creation of breathtaking acrobatics by Gypsy Snider of the Montreal-based circus company Les 7 doigts de la main (also known as 7 Fingers). PIPPIN features many Broadway standards including Corner of the Sky, Magic To Do, Glory, No Time at All, Morning Glow and Love Song.

PIPPIN was first performed at the American Repertory Theater at Harvard University, and is produced in Australia by John Frost, Suzanne Jones, Foundation Theatres and The Star.

The exhilarating Tony Award®-winning hit musical PIPPIN is full of extraordinary acrobatics, wondrous magical feats and soaring songs from the composer of Wicked.

Featured image : The cast of ‘Pippin’ coming to the Lyric Theatre

Sydney Arts Guide has one double pass to give away to the performance of ‘Pippin’ on Thursday 26th November at 7.30pm at the Sydney Lyric Theatre, The Star. Email editor.sydneyartsguide@gmail.com with PIPPIN PROMOTION in the subject heading and in the body of your email please include your postal address and your mobile phone. The winner will be advised by email.