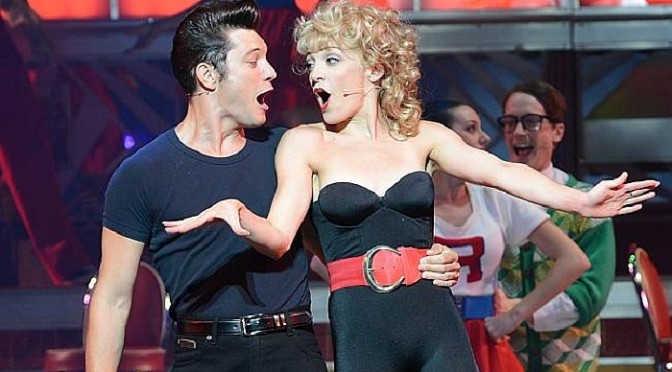 With its memorable songs and American working-class, youth subculture of the 1950s as a backdrop, Grease is truly the ultimate party anthem.  The ever popular soundtrack surfaces everywhere from weddings to primary school end of years concerts.  The Australian production has been very successful so far with extra shows added to the Brisbane tour. There’s been talk about taking the production overseas to Singapore.

Rob Mills and Gretel Scarlett play the lead roles supported by a great cast including Rizzo, the leader of the Pink Ladies, played by Lucy Maunder, and Kenickie, played by Stephen Mahy.

At the media call at Her Majesty’s Theatre, entertainment legend Bert Newton, who plays DJ, Vince Fontaine, was in full retro gear, with his cowskin jacket, blue suede shoes topped off with the 50s surfing style ginger hair and that trademark cheeky grin. One was reminded of his media career as a teenager during 50s radio.

“Oh, it’s great fun to be out here on stage,” he told the throng in his classic American DJ drawl. “But the thing I really love about it is the cast. So young, so inspirational. Their energy level is amazing. As a kid, I only had one ambition and that was to be an announcer!”

It’s been 10 years since Antony Callea who plays the All-American, rock-star student Johnny Casino, was a contestant on Australian Idol. He previously worked on the musical Wicked.

“You know what I am really lucky that I am able to this,” he said. “10 years after Idol, I am still doing well, recording albums, touring and do musical theatre. It’s been a great challenge to do these crossovers. Working with people like Bert and Todd who have been in the industry for a very long time is great because you can learn so much from them, both on and off stage.”

If you loved the movie, its soundtrack, great acting, high voltage energy and great entertainment, Grease is still the one you will want.

GREASE will be playing at Her Majesty’s Theatre in Melbourne until 16th March, 2014.