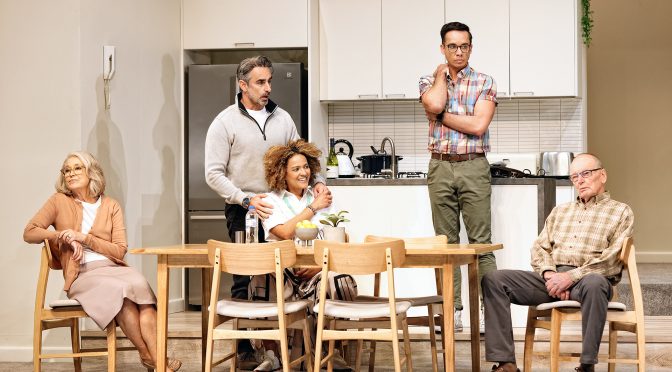 Bess Wohl, one of the important new voices in American theatre said in a recent interview that she was inspired to write her latest play after hearing stories from friends about their parents breaking up after long marriages. She determined that this was an area worth exploring.

Her explorations, which included interviewing  many senior citizens, have resulted in GRAND HORIZONS, currently playing at the Roslyn Packer Theatre.

Nancy and Bill have been married fifty years. They have just moved into an independent living retirement village called Grand Horizons.

Over dinner one night Nancy says to Bill ‘I want a divorce’. Nonplussed Bill casually replies ‘ok’. Nancy begins the process of moving out.

When this news gets relayed to the family, a huge kerfuffle and drama ensues. Son Ben with his wife Jess and younger son Brian come to the family home, demanding answers, desperate for Nancy to change her mind. Emotional chaos follows.

This was a play that I had mixed feelings about.There was a lot going on as the playwright tapped away at things.

Some of these explorations grated. Numerous times Jess has a go at Ben for calling her babe. Does babe have to be gender specific? Isn’t it ok these days to use a term of endearment?  Yes Ms Wolf, did you really need to let us know how hip you are about gender linguistics?!

Then there’s the  sexual flirtation that takes place between Brian and hook up, Tommy  that takes place in the living room, just beneath the stairs, that really rings the credibility alarm. I didn’t believe it.

Where the play was powerful was in its depiction of old age. Here were Bill and Nancy still with libidos and talking dirty in their eighties. Husband and wife  secrets came out that would otherwise not have been exposed.

Here was elderly Nancy  boldly deciding to go out on her own. There was their kids determined to control and manage them, as if they were the uncontrollable kids? The playwright exposed interesting perspectives.

The cast were all good.

They were led by two veteran actors, Linda Cropper as Nancy and John Bell as Bill gave excellent performances.

Guy Simon played the anxious, gay younger son Brian, who was none too comfortable in the family drama.

It was great to see a favourite actress Vanessa Downing  who delighted in a minor role as Bill’s other woman, Carla.

Renee Mulder’s set of the couple’s living room and kitchen was meticulous.

Wohl’s play is one of those plays that gets one thinking.

Helen. Keller is quoted as saying, ‘life is a daring adventure or nothing’.

How many people would be as daring as Nancy in GRAND HORIZONS?!