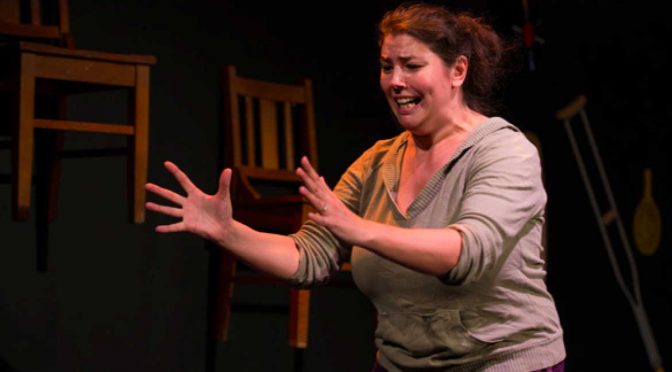 After more than two months of heats 120 Short and Sweet plays and over 700 actors, writers and directors, this ingenious and very short play festival, is coming to an end. The winning plays are in competition at the Depot Theatre  this Thursday, Friday and Saturday night. The  winners in the various categories will be announced at the end of Saturday night’s performance.

All the dialogue is absorbing, and has real emotional pathos. Rachel is a young mother, pushing the swing back and forth, at the local park. Magnificent drama, about living in denial. Rachel believes that her long dead child is sitting on the swing. Will Rachel be able to move from denial to grieving?

One Night Stan (Winner of the 2017 PEOPLES CHOICE FINAL)

Gloriously funny dating experiences, madcap fun and wonderfully touching. Rachel, Holly and Marie are three women, who are all back into the dating game. Always at the same Italian Restaurant, their mystery date is Stan (Stanley) who is dating all three women.

Arthur and Marilyn (Winner of the 2017 DIRECTORS CHOICE FINAL)

ITC presented by Half Boy Company

In an unconventional Valentine’s Day gift, Robert has paid for a funeral plot for two. The play delivers an awkward comedy about life, death, dying and permitted re-marrying choices.

Written and Directed by Graham Yates

A drama unfolds, with the games people play with their lives, piece by piece.  The mask gradually fades away, and a world of terror is revealed. The production features a superb, compelling performance by Garreth Cruikshank.

A self-portrait painted on canvas by the artist Saskia, painted when the artist was seventeen. Today the self-portrait is talking with the now thirty year old artist. The play has beautifully written dialogue, charting her life story, revealed layer after layer.  Both actors deliver charming and very believable performances. A very entertaining life story, delivered in under ten minutes.

This was a winning dialogue driven drama and timpani musical piece, featuring the drummers’s tap tap tap of musical syncopation on assorted musical instruments in the percussion family. Wes is trapped in his mind palace, by reliving all the complex events that occurred   twelve months ago.

This was an interesting drama, that will take you on an unexpected trajectory. Recently deceased Mark tells his partner Andy, that the family dog needs to be taken to the local park so that he can grieve about him.

Written and Directed by Brenton Amies and Cam Ralph

This was a very dark comedy featuring two former Children’s Television hosts who are meeting to resolve their past issues. One of the characters has unresolved anger management issues, and is still costumed and speaking as “The Fluffy Bear”!

This was riotous fun featuring two time travelling police agents. The play is filled with time one liners as they meet and greet past and future versions of themselves.

Luke Berman has expertly directed nine minutes of never ending audience laughter. One of the best comedies of the Festival.

Written and Directed by Jessica Fallico

This was a superbly written drama and message piece. A boy is the  fatal victim of a cowardly one punch attack. After visiting the police morgue, his parents are still processing their terrible loss.

All photos by Robert Miniter.