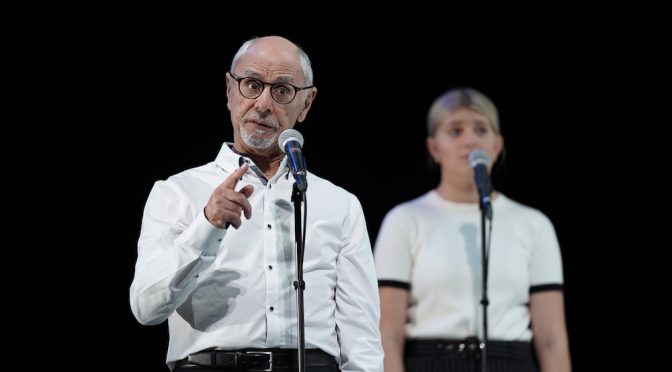 Nick Higgins (Lighting) and Isabel Hudson (Set) have done a magnificent job in David William’s (Writer/director) show GRACE UNDER PRESSURE. The Tardis like rotunda of stretched translucent fabric hung above the white matching shape on the stage floor provided a delightful three dimensional backlit cyclorama on which colours elegantly pulsed and faded in nuance.

The arrangement of a dozen Shure quality microphones (which would have cost an independent hire almost as much as the theatre) paid dividends in the remarkable clarity of voice, in what was (The Bruce Gordon Theatre) already a mid-scale and audibly friendly space.  The set of this show did particularly well to fill what can seem a cavernous height in this theatre, The set and light gave an abstract studio feel to the show.

The problem was that the content and style of the show, collated from edited words of 30 interviews with health professionals, was one of intimate conversational disclosures rather than elevated or abstract action or language The stage was clear, but the narration and sequencing of excerpts from such a bulk of cluttered raw materials was a busy montage of lines, assembled much in the format of a video documentary. One might compare the theatrical work to a radio documentary, except we seem to have less experience of the long radio work these days.

The comparison of the stage representation and what could be accomplished (even with actors substituting for workers, for all sorts of reasons) on video, with close up of conversational behaviours, and rise en scène of medical or everyday interiors seems stark, and one might ask what is the full benefit of what is known as a theatrical verbatim style in dealing with complex public material such as this? Certainly there is a case that the rich tactile and immediate context of talk could be displayed in imagery on stage. The talk in this instance comes from rich technological and human, multi media worlds, and its authenticity depends as much on the lived experience as it does in the words themselves.

One is sure that many of the strategies of the Sydney Arts and Health Collective, to use drama within the Health industry, work very well – comments here are limited to the stage production, especially as remounted in 2021.

In terms of underscoring the intricacies of spoken exchanges, one is not sure that the sound (Gail Priest) with its mechanical beat, especially at the start, was apt. Of course if sound extended to voice audio, then there was a nice balance.

The actors all did a marvellous job – I particularly liked Emily Taylor’s articulate charm, but Meg Dunn and Tanya Schneider were equally accomplished and poised. Sal Sharah went well as a senior doctor – although one could wonder at his role with such a dramatic age difference between cast.

Without a semblance of character, or so much as one prop, the performers were often left to seem overly solemn in cross stage movements and shifting declamation. There is no reason that verbatim theatre cannot develop character – and plot, and climax – in the way it inevitably shapes its material, and one wonders if, with two or three extra cast, and all actors assigned one or two characters, that the work might have been better clarified.

All theatre is verbatim – all writers of dialogue derive phrasings, opinions and linguistic nuggets from overheard or sourced discourse. Usually a play fictionalises its sources, in a contrived work that follows its own rules of development and engagement with an audience. Verbatim, in its legal or public sense, strictly means a complete and authentic record of an event or document. Verbatim theatre is never that – the writer always edits, sequences and organises materials, in part for theatrical effect. Much of the sequencing in Grace Under Pressure went well. The problem is that the effect of and claim to authenticity and privilege (of truth and emotion) seems greater than made by a traditional play, and the audience can lose critical and general sense.

What exactly was this play about? The two or so years of internment (usually in two sections), experienced by student doctors in the hospital system? In the last few years the media has given substantial exposure to instances of admitted shortcomings, including sexual abuse, gender and power, fatigue and working conditions. This theatre work might have been more pioneering in its expose of such conditions in 2017 when first produced.

The show layers in a repetitive way such shortcomings, and extra voices (politician, journalist, academic) pointing to desired reform would provide at least a dialectic development or resolution. Do we need a more European national health system to regulate and pay for improved hospital conditions.

Was the work addressing conditions of nurses and doctors generally? And patients? The program suggests that is the case – if so one must ask in journalist style, for several perspectives, and more resources, for such an enormous undertaking. It is hard to tell with the shadowland of un-named flux of voices what was the exact focus of the subject.

I actually thought this would be about the impact of Covid on the health systems. It is a pity the 2017 work was not updated at least in part for this tour. The program does draw this connection, although unlike systemic conditions of our hospital system, Covid was an act of God, and the tenor of responses however arduous would be accordingly different.

If the writers felt there was some limitation to repeated outcries, then 20 minutes toward the end the show moved into “positive” stories of what was rewarding in the profession. There would be many things that are rewarding, but stories of birth and death were all that were dwelt on. This choice of ‘motherhood’ material had strong emotional impact and without doubt was part selected for theatrical effect.

The play really did need a warning about about the morphine assisted euthanasia in the last story. Speaking personally, having just emerged from three deaths in the family including mother and  life long partner, in recent years, the last thing one wanted to hear in direct speech. It was personally unsettling. I can’t comment whether what was said happens – it wasn’t my experience, when morphine was delivered efficiently and without consent. Perhaps I should add to the bevy of stories of the night.

At the very end the cast breathes in fading bathos to the last breaths of a patient, until death is pronounced and in the same way the show, and presumably our health system, is deemed to have ended. Really?

The audience on the night seemed to value the undeniable significance of aspects of the subject matter, and no doubt many qualities of the production.

Theatre. Does it need to entertain? Truth, yes, but in John Keats sense, truth with beauty. And tragedy with hope.

Verbatim genre, in as much as it does exist, does seem to be effective on certain particular terms, but this is not the right occasion to generalise what they might be.

GRACE UNDER PRESSURE, co-produced by Alternative Facts in collaboration with the Sydney Arts and Health Collective, is playing the Bruce Gordon Theatre, Illawarra Performing Arts Centre, Wollongong until the 15th May, 2021.