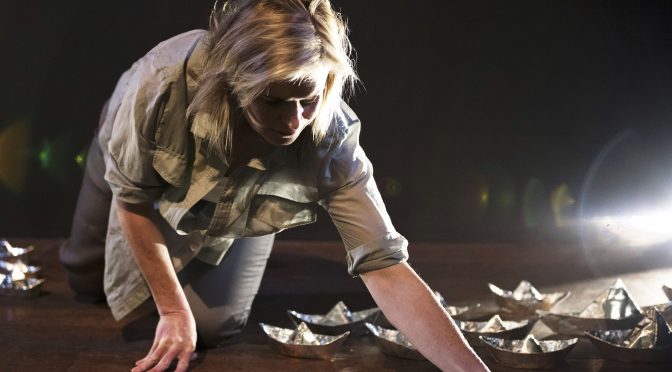 The protagonist of GOOD WITH MAPS speaks to her audience of a quest, a longing fueled by a firm belief in the power of geography to inspire.  This delicately robust show, which is part of the INVISIBLE CIRCUS season at Kings Cross Theatre, is intelligent, lyrical and haunting.   And in that tiny, bare space the journey is there for the taking.

We meet the traveller who tells us straight up that she is, in fact, good with maps.  She is a map and novel reader whose travels are driven by the places between the old maps and the new.  Her question, and quest, concerns whether there are still gaps left in our topography.  Where be the dragons?  As she pulls us into her trip to the mighty  Amazon, the mythic arises in the form of her father’s diagnosis of aggressive Parkinson’s Disease.

The delicate nature of this production is in the finely balanced performance of Jane Phelan as The Speaker.  From the outset she speaks directly to us with a character which is clear and vibrantly elucidated as Phelan’s passion drives her around the small stage.  Occasionally she will plant her feet solidly in the space and, alive with emerging ideas and thoughts, she swiftly spins, desperate to share with everyone there.  And she is not just charming, she is funny.  Light moments are character driven and delivered with a wry knowingness which endears the speaker and impels the plot.

She speaks softly, sometimes slow and thoughtful, sometimes tumbling over her enthusiasm to share an historical titbit or a moral possibility.  Director Kate Gaul’s solid choice to use a well operated face mic, grounds the production.  Phelan can move any way without the audience losing content and Gaul’s direction resists the temptation to put the performer at the head of the traverse where she can always be fully seen.  It also gives Phelan the freedom to use her vocal range to create emotional landscapes for the listener.  Supported by the brilliant soundscape of audio designer and composer Nate Edmondson.

I always seem to love Edmonson’s work but this is something special.  With absolutely no sense of cultural appropriation, his themes are a counterpointed homage to South American rhythms and instruments.  Flutes, woodblocks, shakers, claves all sneak in as the music heightens emotional moments yet allows for silences.  The single instrument for the dragonfly which swells and rises evocatively to suddenly fall silent as the speaker’s father appears in the story gave me goosebumps.  Very, very quick hits and punctuations sometimes.   That few seconds of violin at the mention of the Belle Époque!  Marvellous.

Gaul has other strong creative collaborators. Designer Alice Morgan’s simple wooden chair, piles of musty looking books and hospital coloured curtains combined with The Speaker’s soft pastel safari-flavoured khaki shirt to tie the production together.    The silver boats swathed on the stage floor were a little jarring to my involvement in the work but I did appreciate the silver shoe match.  Colours chosen by Louise Mason for the lighting were gently blue when a big sea, river, bright blue would have been horrid.  Ochre tinted red for the Amazon was also subtle and unobtrusive and a nod to Indigenous facepaint.  Kudos to the audio/lx operator for so many superbly timed cues.

The robustness of this show?  It’s there in the text.  From the outset the writing makes the audience comfortable travelling with The Speaker who is actually The Writer. We know who we are and why we are listening and sharing the search for ultimate answers.  Noëlle Janaczewska has created several of these performance essays—a term she coined to describe a hybrid which mashes the essay and the monologue with a range of other sources and genres.  Part of the wonder and joy of going with the reader/writer is what she knows.

There is history and literature and ideas that I stored in the back of my mind so I could google them later.  Z?  Who knew?  Of course Conrad is mentioned but Gogol looms large yet Woolfe and even Wind in the Willows are solidly planted.  As are the astonishing facts about a stolen rubber trade and the seed piracy that created an empire.  It’s a robustly intellectual essay softened and moderated at the heart by the emotion of our final travelling. The linking of the two themes towards the end of the piece is almost throwaway, a breathtaking simplicity which belies the complexity and reach of the work.

Why do humans quest? Is it just to see what is on the other side or, more profoundly, to find the ultimate meaning before our inevitable death?  That surely is the quest of GOOD WITH MAPS.