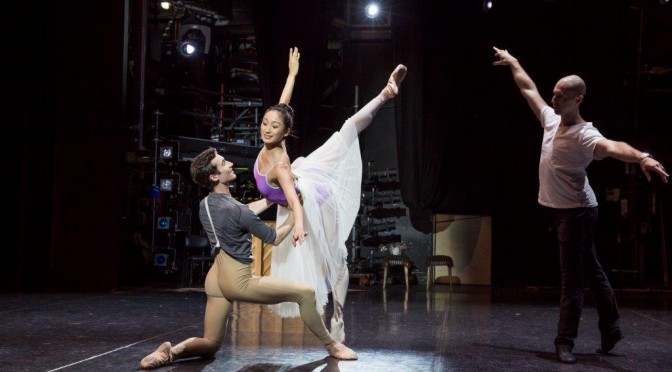 Part of the Ballet’s educational programme , this was a fascinating chance to watch some of class and rehearsal for the upcoming production.

Promptly at 1130 am the curtain rose and we saw some of the members of the Australian Ballet in their daily grind of class. Teacher David McAllister, with headphones and miked welcomed us and explained about the daily ritual of class and how they were about half way through.  Barre work had just finished and they were about to start centre work. The portable barres were shifted and the ladies changed into their pointe shoes.

The class took place with the piano hidden off stage.The set for the current production of Filigree and Shadow ( part of 20:21 ) was at the back of the stage , plastic barricades keeping it separate. The dancers wore a motley of colours and styles of t shirts, legwarmers, leotards and some floaty skirts for the ladies. Some of the men were bare legged and some wore bandannas or headbands.

McAllister set the various enchainments ranging from pas de Basque,  grande battement, calling and demonstrating the steps and counts and what he was looking for. Most of the dancers – if not all – marked the steps with their hands, instilling the steps in their body memories and getting the counts correct .

The class then settled into various groups, sometimes quite small in number, because of the need for space. Some enchainment were repeated both left and right, some not. Individual expression in the use of arms was quite acceptable. Eventually the class moved to pirouettes, flying jetes etc. For the penultimate enchainment, different variations were given for the ladies and gentlemen, utilizing their differences (cabrioles for the men, more lyrical but still fast and demanding for the ladies).

McAllister kept an eagle eye on everything and everyone. For some of the enchainments, afterwards he would give general corrections about placement and alignment of the hips, as an example. A couple of times he gave quiet, individual corrections to particular dancers who then repeated the phrase of movement a couple of times until McAllister was satisfied. He was often very encouraging with a “ yes! Better ! “ or “Very good “ or similar.

There was no cool down as such – just very briefly releves to keep the feet warm and supple.

McAllister explained to us once class was over that often dancers work in class on particular steps for the repertoire coming up .

Then, very briefly, we were privileged to watch a short rehearsal of the tricky Rose Adagio from The Sleeping Beauty with Lana Jones as Aurora and the four princes Ben Davis (Spanish prince), Rudy Hawkes (Hungarian), Andrew Wright (Swedish) and Brett Simon (English). There were a couple of stop/starts and quite a discussion on placement, weight distribution in the lifts, and other partnering technicalities. The terrifying balances were excellently performed.

It was just the one run-through and then unfortunately it was time to leave after a round of applause and thanks.

The Australian Ballet’s Behind the Scenes With Sleeping Beauty took place at the Joan Sutherland auditorium Sydney Opera House on the 11th November.  Running time an hour.