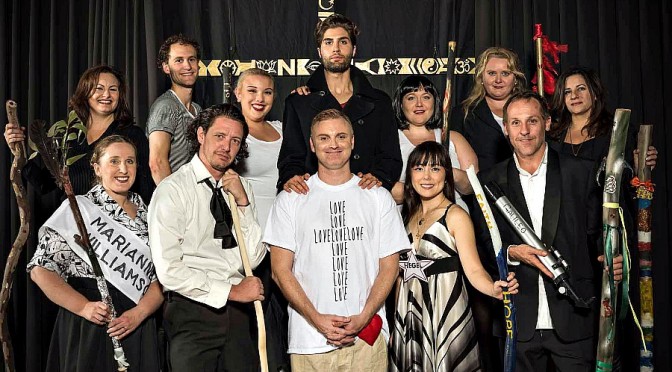 In their program and on-line, Lane Cove Theatre Company is lobbying the local council for a space to call home. After a 20 year commitment to community based work, it’s about their future. And from the work I saw on display in GODSPELL, their future is well worth supporting.

It’s not just the quality of the on-stage work; it’s also the friendly atmosphere and the large number of young people giving up their Friday night to support their family and friends.

The small venue was packed out for opening night. The Lane Cove Theatre  Company  clearly values and respects its audience and with this revival of GODSPELL it has put on a show worthy of any proud theatre organization, big or small.

GODSPELL had its origins in the writer John-Michael Tebelak being refused entry to a Baptist church in the 1970s because of the hippy dungarees he wore. As a directing student at Carnegie Mellon University he decided to turn the experience into theatre, eventually teaming up with another alumnus, Stephen Schwartz who would later become a phenomenon with the success of his score for WICKED. The show received strong acclaim and continues to be a popular choice for schools and theatre companies worldwide.

Based mostly on the Gospels of Matthew, GODSPELL is a series of parables presented in different vocal and orchestral styles and leading ultimately to a representation of the crucifixion of Jesus. The parables include The Good Samaritan and the Sower of Seeds and The Prodigal Son. A working knowledge of the Bible is not necessarily required as the stories are popular and designed to be entertaining.

Jesus has a distinct persona as does the actor who plays John the Baptist and later Judas Iscariot. The rest of the Ensemble is only referred to as Soloist 1 etc in the text. They are a blend and they adopt the character of the moment, anything from pigs and sheep to Satan tempting Jesus in the Gardens of Gethsemane. This does not mean though that the individuals do not have presence.

The skilful direction of Christine Firkin is at the heart of how this large ensemble present such an entertaining night. Firkin has put movement at the centre of the storytelling. For example, she separates Jesus from the cast during Act 1. He often leaves the stage or stands apart moving forward to clarify or interpret but as the crucifixion nears in Act he blends into the ensemble for the larger numbers. This is complex directorial thinking. As is the stillness of the female harmony and wonderful Alto solo of We Beseech Thee. That was my highlight, actually.

Sometimes Firkin allows her cast a literal interpretation, wailing and gnashing of teeth, but often it is figurative, using circles and swirls of ensemble to fill the stage area. The end-on stage is wide with black rostra on the lovely polished wood floors. But it is not a deep stage and the narrowness allows considerable audience interaction with the rows of viewers.

Audience members are invited up to read from cards or play charades and can join in the dance which closes Act 1. This kind of intimacy is well balanced with the upstage scenes when we can sit back from the action and appreciate the more philosophical aspects of the performance.

Choosing the more modern interpretations from the recent Broadway production, including finding a place for L Ron Hubbard and ditching Buckminster Fuller from the prologue, and deciding not to use any forced allusion to resurrection, the director has made a relevant production. The use of the heart symbol and the vaguely glittery, hippy costumes which resonate the red palette, rather than the misunderstood clown costuming, are subtle and accessible.

There are references to Facebook, Miley Cyrus, and Vegemite. Even Community Theatre workers as part of the Beatitudes … not sure about that! The cross has lotus flowers, Sanskrit, a prayer wheel, a crescent moon, and the inclusion metaphor is modern and replete.

The cast is uniformly engaged, responsive and sing with passion and belief. There is some excellent vocal and acting work on display. As Jesus, Trent Gardiner has a powerful voice and is amused and excited to educate his ‘children’ without being supercilious or aloof.

As John the Baptist/Judas, David Hov begins the show with a perfect a Capella intro to Prepare Thee the way of the Lord. The ensemble are wise and funny, a bit over the top, even hilarious, in places, and everyone is entertaining and involved.

It’s a really good show. Well directed, well-acted, great orchestration from the small band. It doesn’t really matter that the good lighting design would benefit from a decent board so the LEDs don’t flicker, and that the audio system needs a tweak, because this is a great night out. Imagine however what this company could achieve with their own space in the future!