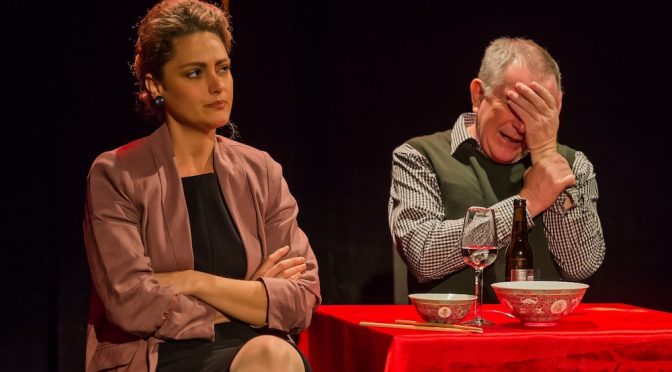 The New Theatre’s new play is a revival of American playwright David Mamet’s 1984 Pulitzer Prize winning drama GLENGARRY GLEN ROSS. In its critique of the great American Dream  it has been described as a latter day ‘Death Of A Salesman’, Arthur Miller’s classic 1948 drama.

The plot revolves around a group of unscrupulous real estate agents ripping off unsuspecting clients by selling them worthless blocks of land. Glengarry Highlands and Glen Ross Farms are two real estate developments that the agents are trying to sell off during the play.

This is the plot but the subject is toxic masculinity. The men swear like troopers and equate their virility with sealing their latest deal.

Mamet’s play is bitingly relevant today with what has been happening lately in Canberra. One only has to reflect on the ABC’s 7.30pm program which saw Leigh Sales interview former Liberal Party Deputy Prime Minister Julie Bishop and question her about the group of Liberal Party politicians who called themselves ‘The Big Swinging Dicks’ and tried to impede her rise within the party. Julie Bishop proudly noted that their attempts were clearly unsuccessful!

Director Louise Fischer, the New Theatre’s current Artistic Director, has made some intriguing choices in her production. Three of the roles are played by women.

Gender swapping is not uncommon in contemporary theatre. It took me a while to get my head around Fischer’s decision. ‘Glengarry Glen Ross’ is a very male play like, for instance, Robert Harling’s 1987 play ‘Steel Magnolias’ is a very female play about a group of hairdressers living in Louisiana.

To be honest, I’m not sure if this interpretation works?!  Is Fischer saying that women are just as ruthless as men, if not more, in these kind of jobs?! I thought of the famous Lady Macbeth speech where she exclaims, ‘unsex me now’…

I looked at the program to see what Fischer wrote in her Director’s Note but, most unusually, this was absent.

Another interesting choice by Fischer was to use the first scene from the movie version of the play, which starred Jack Lemmon, to begin the play. I thought that this choice worked well.

The set, another accomplished, multi-level set, has been designed by Tom Bannerman. The set is Bannerman’s 73rd set that he has designed for the New Theatre and his 270th in all. An immense achievement.