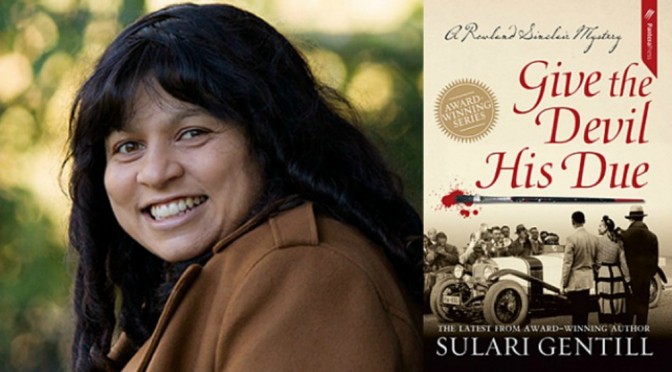 In this modern age, when books have to compete with television, many modern authors of crime fiction have resorted to sensationalist writing. The detectives are hardbitten, jaded men [almost always] who, at times, are as ruthless as the criminals they pursue. Serial killers abound and their victims are often dispatched in increasingly vicious and bloodthirsty ways. Such novels leave readers breathless and aghast, even nervous and wary of life in general where such horrific crimes are committed.

How delightful to come across this work by Sulari Gentill. I must admit “Give The Devil His Due” is the first of her books I have read though it is the seventh in the series.

Set, as they are, in the 1930’s, this is a gentler time. The young artist, Rowland Sinclair, is, apparently, wealthy enough to pursue his career as an artist and his hobby, driving his yellow Mercedes. When he is invited to take part in a charity race on the notorious Maroubra Speedway, he agrees happily [noblesse oblige], little knowing that this innocent act will lead to murder, kidnapping and general mayhem. Sinclair, however, has the intelligence and the savoir faire to deal with the problems that arise: witchcraft; fascism and the rumblings of Nazism –all with wit, courtesy and unfailing good humour. Of course, Sinclair emerges triumphant and good vanquishes evil, which is as it should be.

Scattered throughout the story are various newspaper articles, culled from the newspapers of the time, which add verisimilitude to the time setting. Of particular interest to the older reader are the inclusion of minor characters such as Edward Mosely,  Kenneth Slessor, the poet, Errol Flynn, feckless actor,  the wonderful eccentric, Arthur Stace and, playing a slightly more significant role, the young Roseleen Norton, the witch of Kings Cross.

The novel engrosses the reader with a complex plot, murder, skulduggery, adultery and scandal, yet it is presented in a style that mirrors the period in which it is set.

In all, the old-fashioned setting, the patient unfolding of the tale, all add to the charm of this novel and I, for one, will certainly search out Sulari Gentill’s  previous books.

GIVE THE DEVIL HIS DUE by Sulari Gentill is published by Pantera Press and is retailing at $29.99.