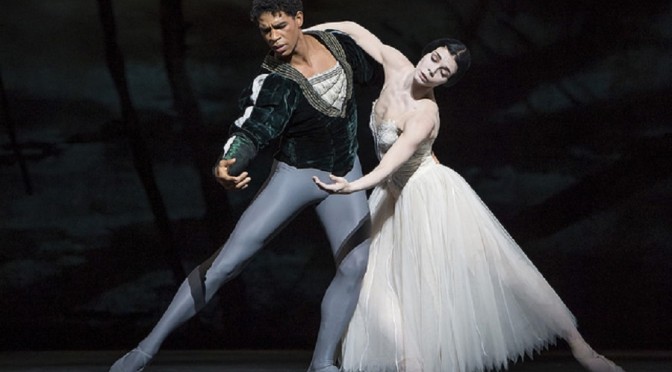 As playboy charmer Count Albrecht, Carlos Acosta was great. He is at first just out to have fun and a good time but falls deeply in love with Giselle and is shattered by the disaster he unwittingly causes. His dancing was clean, crisp and precise, fluidly elegant and passionate. It is interesting to note that in this version it is Albrecht who crowns Giselle Queen of the Harvest. He observes Giselle’s mad scene with horror and is forced to accept the consequences of his previous actions. Their pas de deux together in both acts are marvellous. He is a fine devoted partner and responds to Osipova with elegance and vivid attack.

In this production, Berthe’s mimed story about the Wilis is told to a large gathering of corps de ballet villagers .Deirdre Chapman , a concerned and stern but very loving mother,  makes it very dramatic and chilling , a warning to all the young women not just Giselle. In this version the ‘Peasant pas de deux’ is more a ‘Peasant pas de Six’, delightfully performed to celebrate the harvest and featuring Valentino Zucchetti and Yuhui Choe. Bathilde Albrecht’s real fiancee (elegant, beautiful Christina Arestis) was definitely a city woman – her dress was stunning and you could see she did not enjoy a day out in the country.

Poor Hilarion in love with Giselle was well danced by Thomas Whitehead in a terrific, sympathetic performance of a man whose world is turned inside out when Albrecht arrives and meets Giselle. He opens Act2 mournfully at Giselle’s grave and gave us some fabulous jumps particularly in Act 2 when tormented by the Wilis.

Myrthe, Queen of the Wilis, was well performed by Hikaru Kobayashi; cold ,regal and implacable, driving Hilarion to his death and attempting to kill Albrecht too.

There was fine ensemble work by the corps de ballet in both acts and Wilis in Act2 were eerie and menacing.

The camera allows us to get up close and personal and see full facial expressions, sweat and more. Sometimes there is very effective use of aerial shots to show the patterns of the choreography. Former leading ballerina Darcey Bussell introduces the programme and interviews at interval.