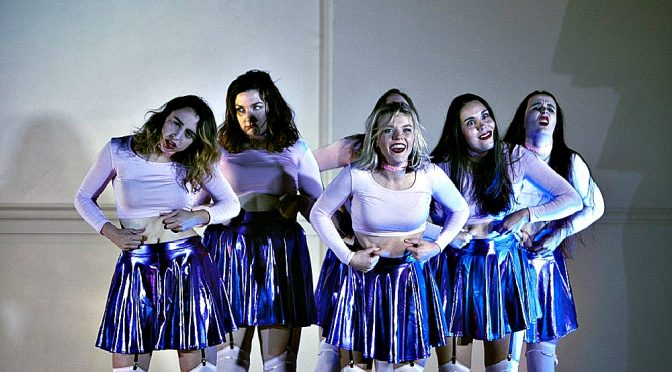 GIRLS GIRLS GIRLS is the first feature length work to be performed by Bonnie Curtis Projects and is part of the Sydney Fringe Festival.

GIRLS GIRLS GIRLS attempts to explore the experiences of young modern Australian women, body image and sexualization, the mask women wear as a public face, and the use of social media.

Our emcee for the evening was Melinda Penna, in a black dress with a white fluffy short wrap – think the ads for Australian Dance Theatre’s Birdbrain – and sparkly silver high heels.

Penna introduced the two works to be performed through the evening and has a big part in the second half – more of that later.

The production was staged in a heritage church, there were cushions at the front where the audience could sprawl for relaxed viewing if desired, with the rows of seats behind. There was no set as such, just a raised stage and some most effective lighting of washes of colour and intriguing use of shadows.

The first half of the performance, choreographed by Kate Garrett, who also performed in the work, was entitled When I Was with music by British folk band Steeleye Span, Relatively abstract, purportedly looking at love and loss, it was rather buoyant and dreamlike in atmosphere.

There was fine, strong ensemble dancing by the cast of five who entered through the audience. The dancers wore casual comfortable street clothes of multi coloured tops and long flowing pants.

Garrett’s choreography demanded a very flexible back, long stretched curling lines of the body and soft, creamy movement, a lot of it circular.

The piece featured some very unusual lifts and partnering, also some floorwork including rippling legs and arms and in one section there were hand like flickering stars. In other parts there were undulating arms like seaweed and it was as if the dancers were underwater – this was contrasted with robotic like movements at one point. The final section showcased strong pulsating ensemble work and made much use of balance-release -fall.

After interval we returned for GIRLS GIRLS GIRLS to find the cast in assorted positions in the auditorium and were invited to drape them in various items as found in bags at the entrance. In some ways the cast became soft sculptures -one cast member was entwined with vines around her arms. Under all this the cast wore pink long sleeve tops, pink stockings with garters and short shiny purple skirts. Completing the ensemble were frilly underwear and a pink jewelled collar.

The cast eventually rose and moved onstage in slo mo, to pulsating throbbing electric ‘underwater’ music, removing most of the items which  the audience had draped them with.

The middle section of this darkly satirical and confronting work included speech and featured sections of fast throbbing percussive music, slithery floorwork, plenty of seductive headshakes and neckrolls and one of the five dancers appeared to be attacked and driven out by the rest of the group.

Kara Peake, wearing a doll like mask, then had a solo commenting on body image where she frantically blew up balloons as breast implants ( to ‘In the Hall of the Mountain King’ by Edvard Grieg ) which was then followed by the other dancers doing the same – to ‘Ne Me Quitte Pas’ ( If You Go Away)’.

This led to a mock fashion shoot with photographer, people holding fans, dancers taking selfies etc …which culminated in the return of our emcee and the ‘ beauty pageant’ section with each of the dancers in character ( for example a cat loving vegan, a Kardashian fan) answering various questions.

The evening concluded with the pageant winner being decided (by the winner of the lucky door raffle) and then, to an edited version of Satisfaction by Benny Benassi, a brash cheeky, sexy, strutting finale where the dancers posed in tableaux at the end unhappily pulling at their bare midriffs implying they are too fat- they were of-course not!

This was a very thought provoking and challenging production.