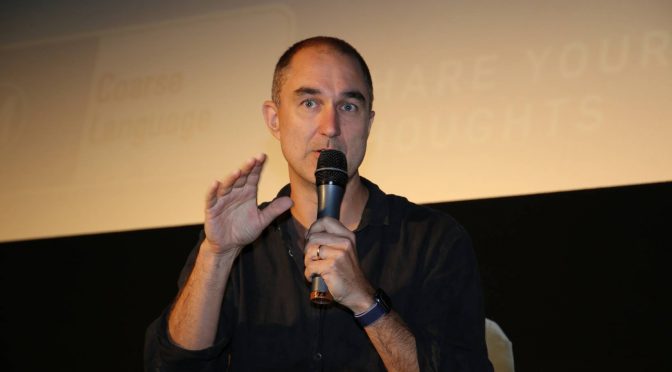 The two storied Randwick Ritz cinema was packed to the rafters as a multitude of tweenies and their parents eagerly awaited the screening and the panel discussion after moderated by Alexa Hohenberg.

The sub-teens were overwhelmingly female and they were the perfect target audience for this important documentary.

The film depicts the rise in importance of women surfers from the 1970s until today.

As some of the veteran surfers indicated, for many of the girls their encounter with the surf was a distant one as they sat in panel vans reading Mills and Boon novels, awaiting after many hours the return of their boyfriends.

Some of them were not prepared to wait and would have a go to see what they were missing out on.

To the dismay of the males, the girls took to surfing like a duck to water (forgive the pun), and they were banished to the part of the beach that attracted the worst waves.

The film was at its most powerful when it showed how chauvinistic the men were when the attempts by such surfing pioneers as Frieda Zamba, twin sisters Jorja and Jolene Smith, Wendy Botha, Jodi Copper, and Pauline Menczer were slowly encroaching into surfing contests.

The only women that appeared in surfing magazines were bikini models and the women surfers were never mentioned.

The veterans would often talk about the hardships they endured when travelling to distant competitions.

The women usually had second or third jobs and, after travel expenses, by the time they reached their destination, they could only afford to sleep in the competition area in their surfboard covers.

The blatant sexism of the male organisers in the early days was laughed out by the responsive audience.

The film also poignantly depicted what the girls personally suffered away from surfing.

Many were told to lose weight, to look sexier on a board, and Pam Burridge suffered from anorexia and drug abuse as a result.This nearly derailed her career.

Jodi Cooper came out as a lesbian fairly early on in her career,  after which sponsors dropped away.

Pauline Menczer only came out after she ended her career.

In many ways she is the most poignant figure in the documentary. In 1993 she won the World’s Women Surfing Championship, receiving a broken trophy and no prize money. Furthermore, she won whilst suffering a severe bout of rheumatoid arthritis, a lifelong affliction.

Menczer now happily drives a school bus at Brunswick Heads. An internet campaign has raised $44,000 to date to recoup the winnings denied her.

Menczer has decided to donate any funds raised over $25,000 to her favourite charities.

Wendy Botha makes for a wry and cynical commentator, and the cynicism is borne out by a photo which shows a woman surfer holding out a $4,000 cheque whilst the male surfer holds up a cheque for $8,000.

Surfing is the only sport that I can think of where male and females compete on an equal playing field – surf.

After the film Beachley was mobbed by her tweenie fans.

Producer Michaela Perske and Christopher Nelius, director, spoke about the difficulty in obtaining footage of the veteran trailblazers. Their efforts were rewarded when you see how much they obtained. This is one of the virtues of this fine documentary when you see a balance between ‘talking heads’ and glorious surfing footage.

I viewed this on the eve of International Women’s Day and like the best of documentaries of this kind, I was outraged.