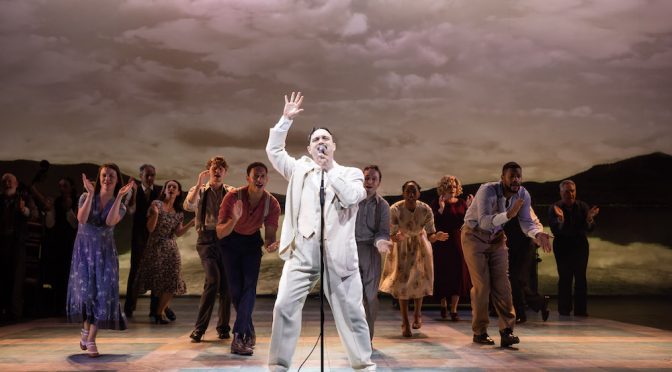 This is the second production to take place since the reopening of the Theatre Royal Sydney. The show which has had successful productions on Broadway and the West End was written and directed by Conor McPherson.

The story is set in a boarding house in Duluth, Minnesota on the shores of Lake Superior. It’s the winter of 1934 and America is in the grip of the Great Depression. Duluth is the town where Bob Dylan grew up in.

His wife Elizabeth (Lisa McCune) has  dementia, his son Gene (James Smith) is an alcoholic and without a job.

Nick and his wife raised Afro-American Marianne who was abandoned as a baby by a couple who stayed at the guesthouse. She is now 19, five months pregnant and unmarried. Nick is anxious to find a husband for her and is looking in hope at shoe mender Mr Perry (Peter Carroll).

To complicate matters further Nick is having an affair with one of his tenants Mrs Nielsen (Christina O’Neill). Adding to the drama he struggles to keep up with the mortgage payments on  the guest house.

Highlights of the show include a lovely version of ‘I Want You’ when Kate (Elizabeth Hay) announces to Gene that she is breaking up with him and that she has found a new man in her life.

There was also a great version  of the classic Bob Dylan song ‘Like A Rolling Stone’ sung by Lisa McCune.

The performances by the primary cast members were all great. Special; mention goes to one of Australia’s great veteran, thespians Peter Carroll.

There were 22 Dylan songs performed, parts thereof, during the show, chosen by McPherson from Dylan’s vast catalogue. Dylan songs weren’t sung until their end, with no audience clapping as the songs quickly segued into further dialogue and action.

The choreography by Lucy Hind was outstanding with very fluid large group movements.

Rae Smith’s set design was an open one with cast members bringing on furniture pieces as required. Large images of cityscapes and the Minnesota countryside dropping in at different times during the show.

This was an entertaining, poignant musical. GIRL FROM NORTH COUNTRY is playing the Theatre Royal Sydney until Sunday 27 February 2022. Tickets www.northcountry.com.au.