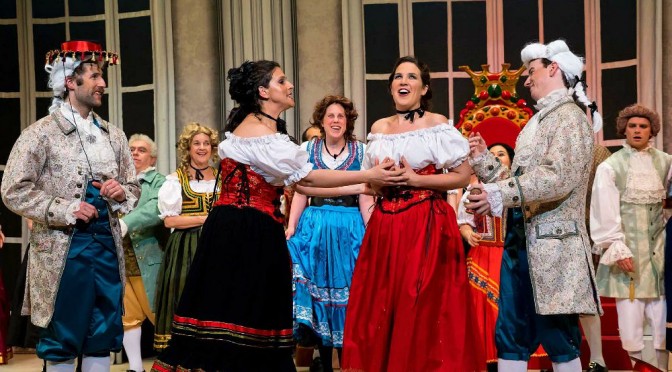 Don Alhambra del Bolero the Grand Inquisitor commands that you attend and greatly enjoy this effervescent production of THE GONDOLIERS by the Gilbert and Sullivan Opera, Sydney.

The silly plot of arguably one of the most loved G& S operettas can be briefly summarised as follows:-

The opera is set in 18th century Venice, and two dashing young gondoliers, brothers Marco & Giuseppe, who have been raised on thoroughly egalitarian principles, suddenly find themselves joint monarchs of an island kingdom called Barataria with very chaotic results!

Both newlyweds, they must leave their brides, Gianetta and Tessa behind in Venice until it is determined which of them is the true king who was secretly married in infancy to Casilda, the daughter of the penniless, eccentric Duke of Plazo, Toro.

Will the Grand Inquisitor discover who the real king is? What happens when the two husbands manage to acquire three wives?!

This production, directed by Gordon Costello with a deft touch, is sumptuously costumed.

In Act 1 we have the look of a Romantic ballet ( ‘Napoli’, ‘Giselle’ ) whilst in Act 2 there is more of a Mozart opera look.

Act 1 has a rather minimalist set with some doors and a few steps and a striking photo of Venice as a backdrop. Act 2 is a light, clear ‘palace’ set with a colourful, cartoon like throne.

The ensemble work was splendid and Elizabeth Lowrencev’s snazzy choreography was terrific, incorporating  musical, ballet and folk dance elements. The large production number of the Cachucha was enormous fun. Much attention was paid to Gilbert’s witty lyrics, and Sullivan’s lush, lilting, catchy music will make you feel like dancing in the aisles. Energetic and enthusiastic music conductor Rod Mounjed led well from the front.

As the two Gondoliers Marco and Giuseppe, Spencer Darby and Tristan Entwhistle were fabulous, in fine voice and a great, witty comic team. Their solos “Rising Early In the Morning and “ Take A Pair of Sparkling Eyes’ were tremendous.

The duets /quartets/quintets were terrifically performed and the showy solos were wonderful as well. Their wives, Gianetta and Tessa, were delightfully sung by Marisa Panzarin and Anne-Louise Finlayson who have much fun with songs such as ‘When A Merry Maiden Marries”.

Dean Sinclair as the Duke of Plaza Toro had great fun stealing all the scenes he was in. He strutted, puffed, danced very elegantly – especially in Act 2– and was wickedly delightful. In Act 2 he channeled his inner Sun King in an extraordinary gold and red outfit. His solos were terrific.

Stephanie Jennifer Poropat  was a wonderful Casilda. She sang divinely and looked beautiful in her red, pink and white outfit in Act 1 and  in a lovely green and white dress in Act 2.  She was in excellent voice and her arias were marvellous.

Catherine Bulfin had great fun as the overbearing Duchess of Plaza-Toro with some very striking heavily beaded and feathered, glittering costumes and with a huge ostrich feather fan in Act 2 .

As the rather sinister, pompous, sneering Grand Inquisitor, severely dressed in black, Anthony Mason was excellent, dominating the stage in his solos.

Luiz was delightfully played by Michael Bond. Tall, handsome and imposing, he looked tremendous in his drummer’s uniform in Act 1 and in his brief appearance in Act 2 he looked just like a storybook prince. His duets with Casilda were  terrific.

This was a delightful, enchanting performance of one of Gilbert and Sullivan’s most popular operettas.

Running time:  2 hours and 50 minutes including one interval.

The production is currently playing at the Smith Auditorium Lyric Theatre, Shore School, William Street, North Sydney. The remaining performances are this Friday night 2nd October at 8pm, and this Saturday night 3rd October at 8pm as well as a matinee at 2pm. Bookings:     http://www.gsosydney.com.au/current-show.html