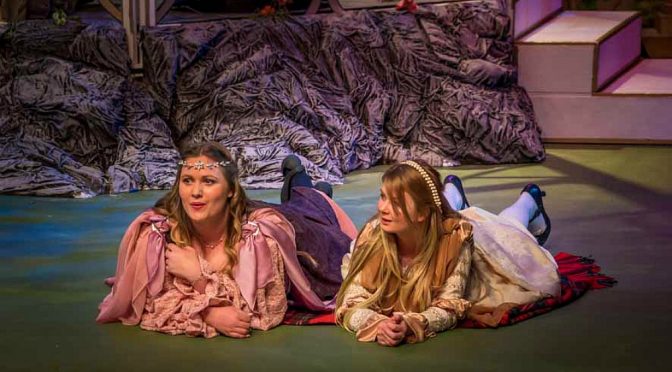 An outstanding relatively ‘traditional ‘ version of this much loved Gilbert and Sullivan favourite is currently showing at Shore school North Sydney.

The operetta is named after a naive village milkmaid named Patience. With its counterfeit pop idols, lovesick ladies and macho military men it is still very contemporary. The play is a witty satire on the Aesthetic movement of the 1870s and ’80s in England and, more broadly, on superficiality, pretentiousness, fads, vanity and hypocrisy; it also satirises pastoral simplicity, romantic love and military bluster.

Patience ( I saw Samanta Lestavel ,who alternates with Bregitte Lahood ) is being wooed by two rival poets – the trendy , ersatz Reginald Bunthorne -a parody of Oscar Wilde, Swinburne , Rossetti and other ‘aesthetic poets’ at the turn of the 20th century – ( as played by Dean Sinclair) and Archibald Grosvenor (Mitch Bryson), but Patience actually doesn’t care for poetry. Meanwhile…. all the well-born ladies in the village are in love with the two poet rivals, to the dismay of their soldier boyfriends in the Dragoons. In a bid to win back the hearts of their ladies, the military suitors decide to try poetry to win them back .Will they succeed? Will Patience discover what love is?!

Lovingly directed by Elizabeth Lowrencev with a fine touch, this production is a feast for the eyes with stunning sets by Bradley Hawkins – the opening tableaux in the forest glade is magnificent , and the garden in act 2 hints at the craze for Japanese styles during the 1870’s and 80’s.

Kyle Stephens’ lighting was lyrical and expressive. Sandi Tutt’s costumes were also glorious – spectacular uniforms for the Dragoons , and semi-medieval dresses for the ladies of the Chorus ( who reform to ‘standard’ late Victorian dresses with bustles at the end ). Bunthorne was a delight in his green suit and Grosvenor enchanting in his purple medieval troubadour like outfit with pageboy bob for much of the show ( when he ‘’reforms” ‘under compulsion” he is in a black and white striped and check suit).

Lyrics have been spiced up a little by Melvyn Morrow with contemporary references – there is a witty ‘Patience’ – a poetic ‘curtain opener ‘ as an introduction projected onto a screen during the overture to set the scene and explain the plot and also in particular the Colonel’s song in Act 1 ( “If you want a receipt for that popular mystery”) which had the audience cheering.

Under the dynamic, assured and passionate direction of Maestro Rod Mounjed the orchestra was splendid with Sullivan’s enchanting melodies lushly played and enchantingly sung. Vocally it was fabulous , the chorus excellent and the principals terrific.

Samanta Lestavel in the eponymous role was delightful as blooming, blushing Patience and was in fine voice. Her puzzled cheerfulness in Act 1 ( “I cannot tell what this love may be” ) changes sharply and dramatically in Act 2 “Love is a plaintive song” .There are hints of The Pirates of Penzance with Patience’s allusion to her duty.

Both Bunthorne and Grosvenor are portrayed as narcissistic and ‘’affected”. The two poets in the operetta are partial to reading their work aloud, particularly to the chorus of swooning , admiring maidens. Bunthorne’s style contrasts strongly with Grosvenor’s. Bunthorne’s is obscure , enigmatic and blusteringly emphatic, similar to Swinburne’s poetry in its style, structure and use of alliteration. Grosvernor’s pieces, pastoral and simpler, has allusions to the work of William Morris and Coventry Patmore .

As Bunthorne, Dean Sinclair has a wonderful time stealing the show whenever possible. His “Am I alone and unobserved? ‘ was great fun, and the duets with Patience, Lady Jane and Grosvenor were delightful.

From his first entrance and duet with Patience ( ‘’Prithee, pretty maiden “) Mitch Bryson as Grosvenor had all the ladies swooning and his lyrical tenor voice was captivating and enchanting. The duet for Bunthorne and Grosvenor ( ‘When I go out of door’) was a show stopper.

The dragoons were splendid with Anthony Mason as the Colonel, Matthew Cobb-Clark as the Major and  Spencer Darby as the Duke being in especially fine voice.

The entrance in Act 1 is thrilling and the trio for the Colonel Major and Lieut.The Duke in Act 2 ( “It’s clear that medieval art” ) when they appear dressed as Aesthetes was hilarious and featured impressive comic timing.

Rebecca Hart as Lady Jane was imperious and commanding –similar in personal style to Oscar Wilde’s Lady Bracknell – and garbed in  a splendiferous, ravishing costume of bronze and black with a wonderful headdress. Her solo with the cello ( “Sad is that woman’s lot” ) in Act 2 was heartfelt, her duet with Bunthorne ( ‘So go to him, and say to him’) was sparkling and fun.

Recommended. There were lots of laughs throughout in this ‘mad and merry sweet caprice’.

PATIENCE is playing at the Shore School North Sydney until October 8.