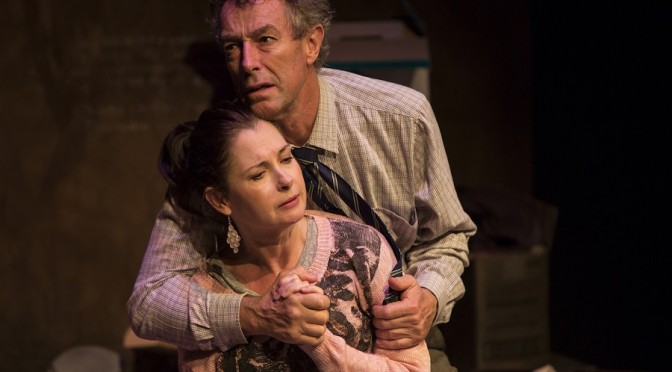 Let me set the scene to Irish playwright Tommy Murphy’s 1984 play THE GIGLI CONCERT, a play which the Irish Times described as, ‘one of the greatest Irish plays of the century’.

Set in Dublin in the early eighties, the play has two main characters and one minor one. First we have a man simply called the Irish Man. He is going through a huge midlife crisis. Perhaps a breakdown would be a better word for it.

He has had a brilliant career, working as a building construction contractor, and has made himself a very wealthy man. He has the wife and kids. And yet he is deeply unsatisfied. All his life he has ignored his artistic side, and now he desperately wants to explore it. Nothing else means anything to him.

The Irish Man is determined to become a singer,- ‘Singing is the only possible way to tell people who you are.’ More to the point, he wants to sing like the great Irish tenor, Beniamino Gigli. Not only that, he wants to perform one concert of Gigli’s repertoire,- hence the play’s title. He will do anything to achieve his goal.

Then there is JPW King. He is an Englander who moved across to Dublin some six years ago, leaving his wife and much of his past behind. He has tried to establish a new life in Dublin. He has fallen hard for a married woman, Helen, who hasn’t returned his affections. Instead he has a happy natured, undemanding mistress, Mona, the play’s third character, who comes around regularly to his apartment (the play is set in JPW’s unkempt bedsitter apartment).

JPW has set himself up as a dynamatologist- a branch of psychotherapy that believes everything in life is possible. His practice is struggling and he has had to set up his office at home. JDW is beginning to lose faith in his abilities as a therapist, ‘I am a charlatan and a quack’.

These two men fatefully meet when late one morning the Irish Man is walking the streets of Dublin and sees a notice on JPW King’s front door advertising his practice with the tagline, ‘I can make anything possible’.

For the Irish Man, this notice is like a red flag to a bull. He knocks at the door, and when JPW finally answers, the Irish Man bids him good morning and pushes his way into his apartment. He tells JPW he wants him to give him the power to sing like the great Irish tenor?

JPW can’t quite believe that he has got a client and is more than a little incredulous about the Irish man’s request but nevertheless agrees to see him. The sessions begin….

THE GIGLI CONCERT plays out in surprising ways. The sessions can be well described as a kind of dance, with JPW and the Irish Man frequently coming close and then pulling away. In the end, the two very different men find a meeting point- they both have come to a point in their lives where they don’t want to compromise any more and live out ordinary, bland lives- they need to feel life in a very deep way.

The play’s final scenes are, in themselves, worth the price of admission. Its goose bumps territory.

O’Punksky’s Theatre revival of Murphy’s play, directed by John O’Hare, is deeply satisfying. The performances by Patrick Dickson as JPW King, Kim Lewis (so great to see her again on the Sydney stage) as his mistress, Mona and Maeliosa Stafford as the Irish Man are confident and compelling.

Summing up, THE GIGLI CONCERT is a difficult and long piece,- the show runs three hours. Rich rewards are there. It’s a show that will have particular appeal to theatregoers who enjoy very romantic- I mean this in the old sense- and imaginative theatremaking.

THE GIGLI CONCERT opened at the Eternity Playhouse, 38 Burton Street, Darlinghurst, located on the corner of Burton and Palmer Streets on Tuesday  7th April and is playing till Sunday 4th May.