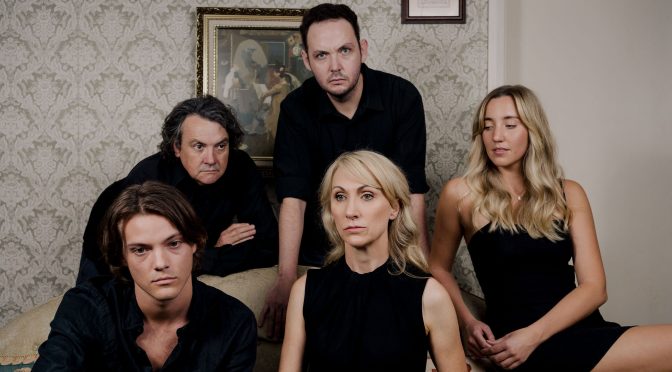 Something marvellous is happening in the Newcastle Theatre world.
This year 2 new theatre companies, launched primarily by younger practitioners, have grabbed hold of the classic realist works of late 19th/early 20th Century playwrights, Henrik Ibsen and Anton Chekov, stripping them back in terms of set and even scenes and staging them in non-traditional theatre spaces.

All’s One staged a production of Henrik Ibsen’s Ghosts in the Dungeon at Adamstown Uniting Church 19 – 22 May 2022 and a new female led company; Her Productions is mounting Anton Chekov’s Uncle Vanya at The Lock-Up 25 – 29 May. Both companies are focusing the work into sparse and intimate spaces, with minimal sets and modern touches.

All’s One mission is to
“…foster a love and fellowship with the playwrights of old, not only Shakespeare — who gave us our name — but Ibsen, Chekhov, Strindberg, all the way back to Euripides and Sophocles. We will bring established texts and ancient ideas to the youth of Newcastle. We will share Classic plays with Modern audiences that leave them affected and really transformed.”

The question is why are these young thespians attracted to these early realism plays? Plays where sinister motivations, carnal, monetary and social status desires are laid open in stifling familial settings and themes of depression, secrets and ambitions are slowly unfolded like those rancid stinky carnivorous plants.

It is all redolent of soap opera. Days of Our Lives meets The Real Housewives. Maybe the pandemic has us looking inwards and backwards even more and revisiting past classics is a way to explore and reflect upon our current angst and despair at a world that has been shaken up. We are clearly heading into a time of deep anxiety and loss of faith in the stability of established conventions and status norms has a causal effect; history repeats and by looking back can we find some insight into how we are feeling now.

Ibsen’s plays attacked society’s values and dealt with unconventional subjects within the form of the well-made play. Ghosts particularly explores the role of women, business and syphilis!

Ignoring the obvious time warp themes of chronic syphilis (now eminently curable) and significant needs for charitable orphanages in Western society, we suspend our disbelief and bear witness to a crumbling “family drama soaked in rain”.

Widow of the lying, cheating drunk Captain Irving, Helene Alving is in the final stages of opening an orphanage in her husband’s name to assuage any rumours about them and to ensure that their artist son, Oswald, who has recently returned from Paris, only inherits from her.

Pastor Manders arrives the day before he is to give the dedication speech to warn her that by insuring it, they would seem to be doubting a higher power’s protection. She agrees.

Meanwhile, Jacob Engstrand is pressuring his daughter, Regina also Mrs. Alving’s maid, to join him in his hostel for sailors – euphemism for a brothel. Though Mrs. Alving is determined to keep Regina in the house, away from Engstrand, she is horrified when she overhears Regina and Oswald flirting. Regina, she reveals to Manders, is not really Engstrand’s daughter, but her own husband’s, and Oswald may have inherited his father’s restless ways as well as a terrible disease.

One of the most significant strengths of this fine cast is their ability to hold and ride their characters through some rough emotional terrain. Rachelle Schmidt Adnum presents a Helene Alving who is alternatively strong, loving and savvy as well as broken and a tragic victim of influence, love and persuasion. Phil McGrath’s Pastor Manders is so offensively and squeakily pious and opinionated early in the play that one wonders how the intelligent and attractive Helene could ever have turned to him for refuge early in her toxic marriage to Captain Alving. Later, we witness a much more humble and far less assured Manders, as all he held to be true is dismantled before him.

Carl Gregory’s cunningly manipulative Engstrand made my flesh crawl, while Tom Rodgers’ Oswald and Hannah King’s Regina were perfect as the beautiful young potential lovers whose lives were so cruelly thwarted by the sins of Captain Alving.

Artistic Director, Nicholas Thoroughgood, supported by Assistant Director Campbell Knox, clearly has a fine appreciation of Henrik Ibsen, having staged a unique and engaging production of A Doll’s House by Henrik Ibsen late 2020.

This latest artistic endeavour with Ibsen’s Ghosts, had a stripped back set with a simple representational living room setting: a few chairs, lounge, lamps, small table and very little else. No traditional three-dimensional proscenium arch staging recreating the living area of a late 19th Century Nordic home. The audience was sat around the intimate acting space, “almost part of the furniture” and the characters frequently wandered around and whispered in spaces behind us.

They even danced in a Pulp Fiction way to The Doors Light My Fire as the monument to Captain Alving, the orphanage, burns!

He also stripped back the script so that the running length was approximately 90 minutes.
The lighting design by Matthew Hudson and Nicholas Thoroughgood was also simple –

a single light streaming through a suspended window and a modern lamp with a couple of bulbs that are switched on as we are more “illuminated” about the unfolding circumstances of this house.

One dilemma of presenting in a non-theatre space is that acoustics and sight lines can be compromised. In some of the more intimate moments, words and facial expressions were lost; simply could not see or hear them at times.

Newcastle has long been a breeding ground for some excellent theatre practitioners and this latest round of emerging artists have all steeped themselves in the theatrical opportunities that Newcastle has, all from a young age. Coming through the ranks of youth theatre companies and performing arts school they are now forming companies of their own so they can experiment with and present theatre that speaks to and for them. And they are creating and presenting thoughtful, experimental, and clever contemporary theatre.

Others to watch are Her Productions and their version of Chekov’s Uncle Vanya, led by Charlotte de Wit and Marigold Pazar.

Uncle Vanya runs at the Lock-Up from May 25 to 29.
Bookings via https://www.trybooking.com/events/landing/880597